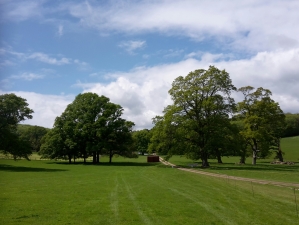 As I started writing this I realised a few things

So here goes,I hope you like this epic.
The late May bank holiday weekend saw us load up the car on Friday morning and head south to just outside Plymouth for the NFAS 3D championships. Unlike others we had a pretty easy drive down and popped into the venue before heading to the hotel. This year we decided against camping and booked into a Premier Inn about 20 minutes drive from the venue. This would prove to be a popular choice of accommodation for many competitors as the restaurant and bar was well stocked with fellow archers in the evening.
The 2015 champs would be the first time we would shoot a 3D championships not held at Osmaston estate, instead it would be at the Flete Park, Devon. I think the extra distance put a few people off travelling, which was a shame as the venue was stunning in parts and relatively easy to get to on the roads (traffic allowing).
This year would also see Sharon defending her championship title in ladies Hunting Tackle. Here is a link to last years shoot report (Link )

Due to these lower numbers of attendees (some 550 rather than 650 or so in previous years) the organisers reduced the courses from the normal 40 3d targets to only 36.
I can understand why they did this, as it made it easier for the course layers but personally I don’t think this was to prove a good idea. The extra few empty targets might have lessened the delays experienced by some archers on the courses.

The other thing which was new was that they instigated a time limit of 8 hours from the start of shooting. Any archers not completing the 36 target course within this time would have to be scored only on the targets they had shot.
This worked with groups being off in good time, but I wonder if this was partly due to

I’m not sure if I like the idea of a time limit. Would it have worked if there had been any problems? Who knows, guess time will tell in the future if they do this again.

There is a an awful lot of work that goes on behind the scenes at events like this, not just the setting of the courses but also the sourcing of a venue, organising delivery of 3ds and administration of shooting groups. I’ve been lucky enough to offer some help a couple of times to break down a course. So I’d like to say thanks to all involved.
Top marks to the administration team who, not only coped with last minute drop outs but also managed to get the first day and final results out and on the website within hours of the last people coming off the courses. Well done.

I would also like to say how great it was to meet new people and those readers and followers of this blog who introduced themselves throughout the weekend. Thanks guys.

What are the championships?

For those not familiar with the process of the NFAS championship here is a quick run down.
The championships consist of 2 days of shooting 2 different courses.
X & Y courses were for archers shooting compound bows, crossbows and barebow ie the metal/carbon arrow courses.
A & B were for longbows American flatbow, primitive and hunting tackle ie the wooden arrow courses.
You are randomly allocated to a shooting group. With all archers in the same class shooting the same course on the same day.
So I would shoot B course Saturday with all other flatbow archers and A on Sunday. Sharon was shooting hunting tackle so shot A course first and then B.
Okay so that is all for now. I’ll try and get the other parts written up as soon as I can. In the meantime thanks for reading.