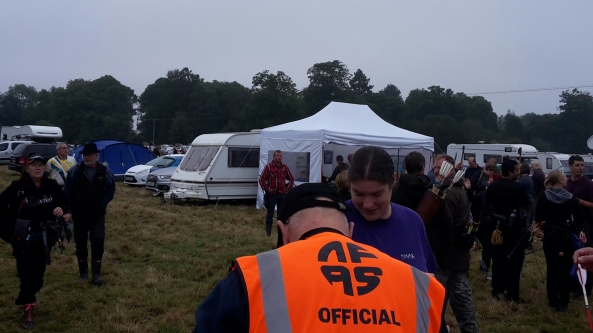 Arrow checks at the National Championships on Sunday

September saw the National Field Archery Society championships which this time was to be held not far from Hemel Hempsted on Gaddesden Estate. It’s not the first time the estate had hosted the championships and if interested you can read the past
reviews here.
For those of you unfamiliar with the championships it is a two day event. This year it would comprise of 2 courses; A & B, with archers shooting one course each day. Unlike the 3D championships wooden arrow and metal / carbon arrow archers would not be split. Each course comprises of 40 targets, these being a mix of paper and 3D targets. You can read last years championships here, which had been held in the Lake District. Some 400 archers would be either camping or filling local bed and
breakfasts or hotels for the weekend.
Sorry there are so few photos from the event but the Saturday was very wet so my phone was buried under waterproofs to keep it dry. I did manage to get some photos from the Sunday though.
With Sharon and I shooting American Flatbow we would shoot course A on Saturday and B on Sunday. A course had been set by by the Field Officer of the NFAS and other volunteers and the NFAS committee with B course being set by the Cloth of Gold club, whose grounds are part of the Gaddesden Estate.

It was an early start both days for us as we’d offered to help with the admin of the event. Sharon would be helping handing out the score cards and I’d be doing arrow checks. For those that aren’t aware of NFAS rules, all arrows have to checked to ensure that they have the archer’s name and the shooting order. On that point, one thing that amazed me was the number of people who attend the event yet forget to mark their arrows or argue that its not needed. Not only are the markings required
by the rules of the society but also a requirement on safety grounds.

If an arrow is shot and an incident occurs you need to know who it was and from where it was shot, hence the reason of shooting order and name. Most people where fine and friendly but there are always a few that feel it feel it’s unreasonable. I can understand why so many of the admin or organising crew get tired and disillusioned. Anyway onto the shoot report…

Saturday’s course would prove to be the flatter of the two courses. With the overcast and damp weather it made the woodland quite dark at times making some of the paper targets very hard to make out. I think this problem was compounded by the use of some new target faces being used this year. Some of these new faces were quite dark, especially the pigeon and goose, which the whole group struggled to first identify and then score well on.

The first day of the champs would see me shooting with Sue, Ian and Ben. I’d shot with Ben at liberty and Sue I’ve know known for years. It was a mixed group of Sue and me on American Flatbow, Ben in Hunting Tackle and Ian in Crossbow.

We started on target 40, which meant we shot one target and then had a
food stop, but that is just luck I guess. The next 20 targets worked well and were challenging, though I think a few could have done with having a torch shone on them as they were very hard to see in the darker areas of the wood. After target 20  had we were back to the food stop and this time did stop and have chance to catch up with others. The second half of the course didn’t go as well for me with a few shots after lunch that were I thought were further than they needed to be. Yes it’s a champs but I think they could have been challenging without being set at those distances.
By the end of the day the rain had stopped and it was a bit brighter, with us heading back to the hotel in Hemel Hempsted for a shower and a meal. One positive thing from the weekend was a large group of us went out for a great meal on Saturday night. 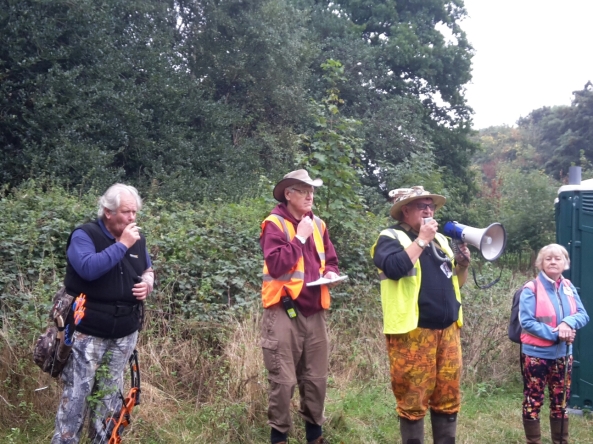 Following very little sleep on the Saturday night due to the hotel room being far too warm and noisy we were up at 6 am and on site for 7 am having promised to help with the administration and arrow checks.

Sunday course would be B and I think the course layers probably had the more challenging terrain to work with and I’m really glad it was dry as getting around would have been a whole lot harder if it had been wet. On a couple of shots the organisers had set up ropes for you to use to get down to retrieve your arrows and it was needed.
As is normal the shooting groups changed completely so I’d be shooting with Ian, his son Connor and Dawn shooting Crossbow. I’d shot with Dawn at last years 3D championships when she had been shooting American Flatbow. Fortunately the weather was far kinder to us on Sunday with it being both dry and slightly warmer. 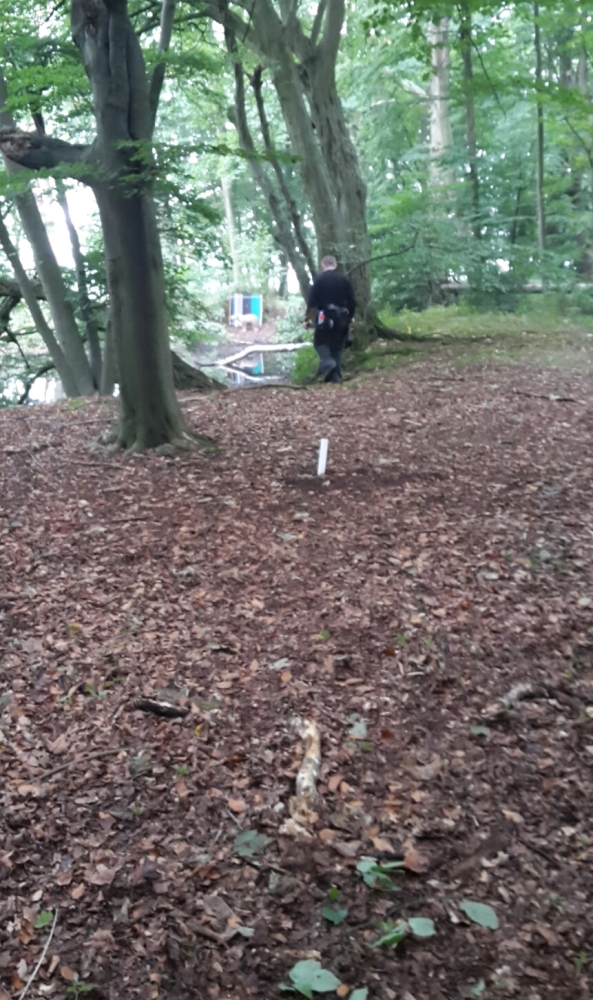 Starting target on Sunday – 3D bear across the pond

I think the course worked well for the most part, with our first target being a 3D bear along a river bank. The downhill paper faced tiger was also a good shot. 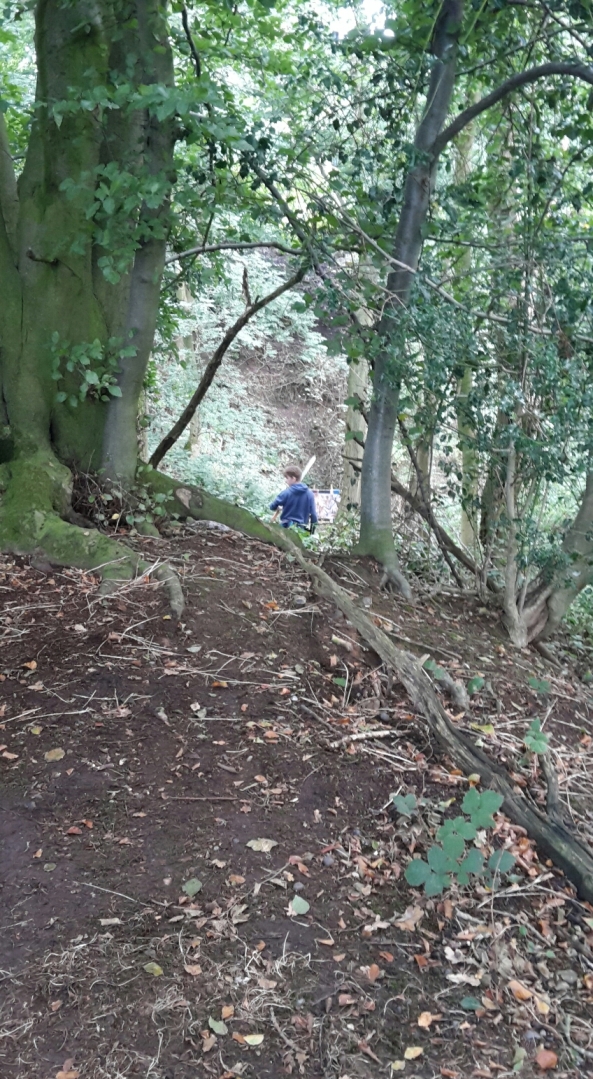 Paper face tiger between the trees

The lack of sleep really played havoc with both Sharon and I with neither of us shooting as well as we could or should have on Sunday. Think Sharon suffered the worse as she’d been working away from home the week before the championships so was already tired. 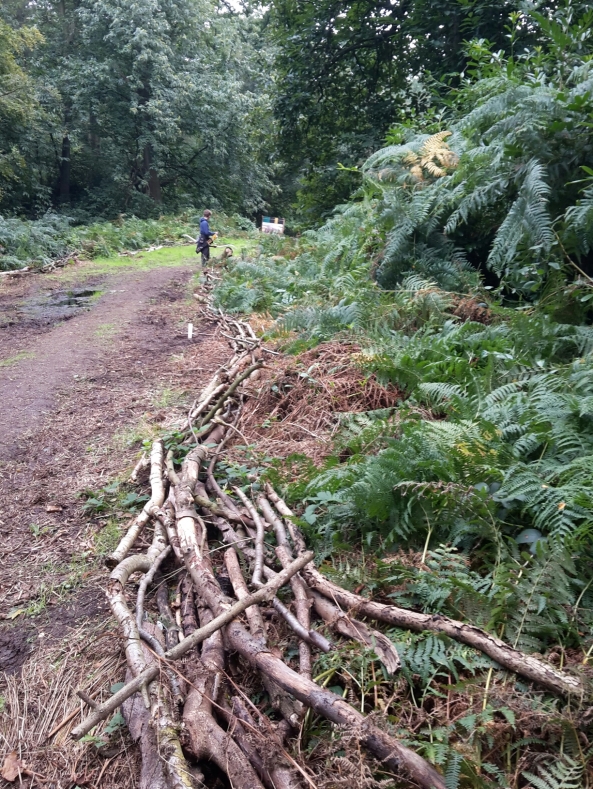 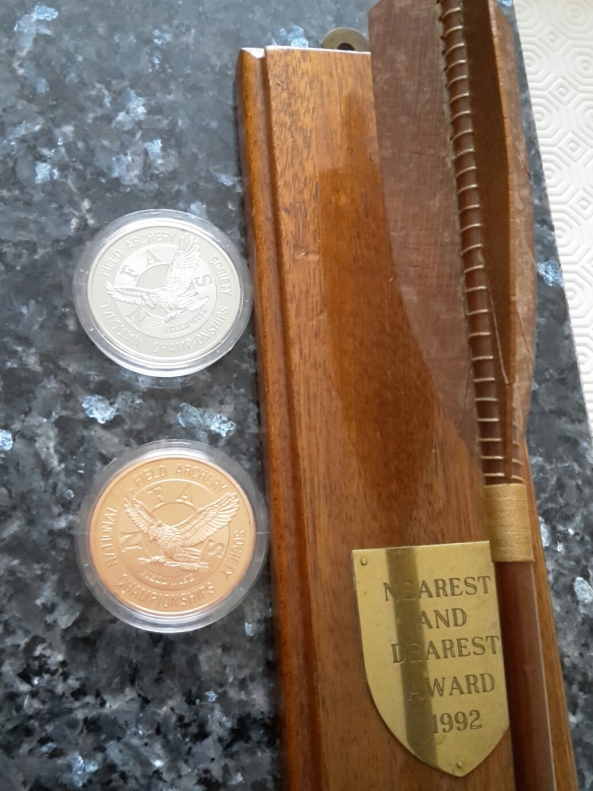 Nearest and Dearest trophy along with a silver and bronze.

Severn Valley won the Barebow Team trophy and special congrats to Mae on wining Junior Girls Barebow at her first Nationals.
Thanks for reading.