Archers massing before the start

On a beautiful sunny early autumn morning we headed towards Windrush shoot grounds in Oxfordshire. I have to say the old adage that the journey is as important as the destination seemed accurate on Sunday, as due to the early start and route down the took us along some country lanes we ended up dodging squirrels crossing the road, indecisive flocks of partridge who couldn’t decide whether they wanted to cross the road and not forgetting the pair of fallow deer running across parallel to the road in a adjacent field. Added to the wildlife was demonstration of multiple hot air balloons as we approached the woodland, all in all it was quite eventful.

3D fox between the trees

It had been a number of years since we’d shot at Windrush and were curious to see how or if it had changed in that time. Our shooting group would consist of Sharon, myself and the father and son team of Anthony and Michael, both shooting barebow and both on their first NFAS shoot. I have to say I felt sorry for the poor souls having drawn what some might have seen as the short straw and others might see as a baptism of fire with shooting with us. Hopefully we haven’t put them off field archery.

The course of 36 3D targets was arranged in a series of loops round the central admin hut which worked well, with about 100 archers navigating the course easily. This meant we enjoyed a shoot through course i.e. no formal stopping at a set time for a lunch break.

Catering was very efficient as was the admin. In fact I thought the whole event seemed to work well. The course was safe and well marshalled, as we saw marshals walking the course checking on archers and targets throughout the day and taking the time to chat. All of which added to the relaxed feel of the day.

The land itself that the course occupies is a flat ground, being in an open deciduous mature woodland. Windrush course layers try and provide some height difference with the use of a platform in one area for a well-hidden bedded deer 3D.

They also make use of a few tree stumps as shooting platforms. I’m not sure if I am completely comfortable with this as I think some might find the footing a challenge. Maybe adding some chicken wire for additional grip or off cuts of decking with the grooves in it would help. Having said that it is only a minor comment on what I thought was a very nicely laid and engaging course.

3D antelope with shooting peg on the stump

Even though the ground is quite open and flat the course layers offered a good selection of targets at sensible distances that were challenging but not stretched. It is so easy on flat ground to push targets that little bit further back to “offer a challenge” but Windrush didn’t do this. They set targets at sensible distances for their size and used the dead ground or framing to make the shot a challenge. 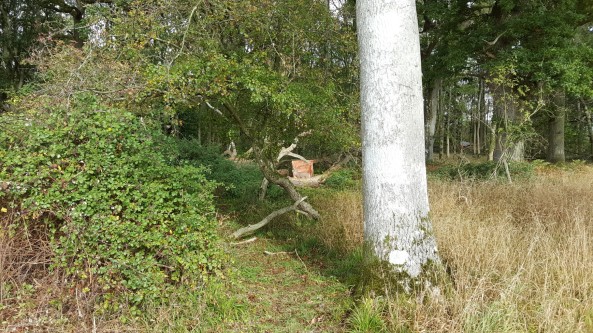 They also managed to use the cover they did have to make for some very nicely framed shots between trees, over or under fallen trunks.
One thing I did learn was if I listen to the voice in my head more often when something doesn’t feel right it helps. On a couple of shots earlier in the day the little voice in my head was saying “come down, something’s not right” Well I didn’t listen and resulted in having to take another arrow. Now I know what you are thinking. “You’re a coach, you should know better” well yes I should, but sadly I don’t always practise what I preach. Having said that I did on one shot I did listen to the now screaming voice and it did make a difference as I came down and drew up a second time( and yes I did get it with that shot)

The day flowed really well with us experiencing no hold ups, in fact the only delay was at one of the food stops whilst Anthony had to replace the rest on his bow. In all it felt a very relaxing stroll in the autumn woodland, whilst chatting with Anthony and Michael about their experiences of archery so far and what their aspirations are. And yes Anthony I am Rob with the blog. By the way, here is the link to the book I was recommending Shooting the Stick bow.
The Briar Rose club saw five members attend and came away with 3 first places, with Sharon winning ladies AFB and me in the gents’ class. Have to say special congrats to Steve on his first in Gents Barebow.
I’d also like to congratulate Eleanor on winning ladies longbow (John let me know when you have sometime with flatbow). By 4:30pm we were all on the road home, making for an early end of good day out.
Thanks for reading.