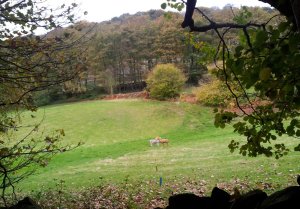 Well it was a very tiring weekend but it was worth it.

Last weekend Sharon and I were camping in Derbyshire, helping at one of our old clubs (Artemis) in their annual shoot.

Artemis ground is in a large mixed leaf wooded hillside just outside Belper, with the course being made up of 36 targets. Due to the geography i.e. lots of rocks just under the leaf cover all but one target was a paper face.

Artemis is both an NFAS club and EFAA one, with a permanently set up EFAA course.

We arrived just after midday on Saturday, having been slightly delayed due to traffic and having to grab some batteries for the two-way radios.  The site was already very busy with people. The weather was clear, though there was a slight autumnal nip in the air. But most importantly it was dry which made finishing off the course, setting up tents and marquee much easier. A few of us were camping to provide security overnight on Saturday as sadly the site has seen vandalism and arson in the last few years.

Setting up catering tent for shoot

As it was we enjoyed a moonlit night with clear skies, add to this was the campfire that kept the evening chill away, helped with an early supper in the form of some great fish and chips from local take away.

Whilst my fellow marshals enjoyed the warmth of the campfire I set off to patrol and am so glad I did. No, I didn’t find anybody, but I did hear something. So I settled myself down and waited.

As a child I used to go bird watching and knew that patience and silence would be key to spotting anything. I’d also positioned myself down wind and covered any visible flesh ( like many people who go hunting or wildlife watching, I knew exposed flesh would reflect in the moonlight). The result of all this patience was the opportunity to see a young badger trot in front of me, its stripped head reflecting in the moonlight. Sadly this was the only one I saw up close. Others I heard and only glimpsed from afar as they went about their nightly activity.

This is one of the things I love about field archery, it gives you the opportunity to see so much of the British countryside and sometimes wildlife.

After the encounter I headed back to my friends and settled down by the fire for a few hours before heading to bed. Sunday was going to be an early start and long day.

We were up by 7 am and patrolling again. Sadly, no sign of my 4 legged friends other than a few scrapes in the ground. Sharon dismantled the tent whilst I checked the first 18 targets putting the faces in place and ensuring no branches had come down overnight etc. there had been rain overnight and the forecast was predicting more in the afternoon. 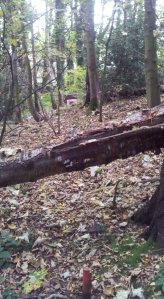 Catering were up and running by the time I got back from patrolling, so I grabbed a quick bacon sandwich and it was time for a marshalling brief by Paul and Mark. Radios were issued, final checks and instructions issued to us where needed.

Then it was just enough time to take our marshalling gear up to our posts before doing the walk out with all the archers.

We had just over 120 archers on the day to shoot the course, a few had dropped out, I think due to the weather forecast.

Paper face deer through trees, think this was target 8

Unlike other shoots I had a static marshalling post at target 11, Sharon was covering targets 9-10.

Target 11 was a  shot out of the woods, over a stone wall and into the field at a 3D deer or leopard (archers could choose which target they wanted to go for) The deer was slightly closer but smaller body, the cat about 4 feet further back but slightly larger. 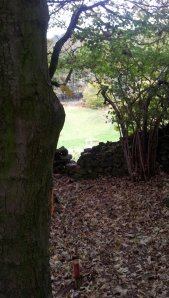 There was much discussion between archers as which target they thought was easier. If you can judge distance well then the deer was closer and allowed for going for the leg line. If though you have a tendency of going offline (ie left ) then going for the cat was possibly a safer bet.

Those archers using scopes seem to struggle the most in the morning due to the contrast in light from inside wood and out. The weather also played a part as the wind picked up blowing across the targets after lunch. Well done Danny and the others for getting it, there weren’t many that hit it with first arrow.

This was the only 3D target on the course and we had to make sure we got all missing arrows in as the farmer was putting livestock into the field the following week.

It would be fair to say quite a few of the archers found this shot challenging. Judging the distance the targets were in the field wasn’t easy, with many going just over the top and burying their arrows into the ground.

Me at the target, before the rain came

Fortunately I’d brought my metal detector with me and this proved invaluable in finding arrows. Considering it was only a cheap model it managed to find the metal inserts in carbon arrows buried 2-3 inches into the ground. I’m glad to say that I found every missing arrow.

As predicted we had a light shower at about 12 and then the heavy rain came at about 3:30. As many of you know wet weather really affects archery, those using scopes struggle with water on the lens, traditional archers with feather fletching see their accuracy deteriorate, strings get wet and archers get cold.

Despite all the rain the feedback has been positive, and everyone got their cars off the field and away safely.

Who knows, maybe we will get to shoot it next time as we won’t be members. (Having moved house we are not renewing membership to Artemis due to the travelling distance involved)

Just need to dry all the camping gear and everything else out now.

Took a tape measure out and its 26 inches long #springwatch #grasssnake @bbcspringwatch
Any ideas what this might be? Thinking grass snake. Approximately 16 to 18 inches in length. #springwatch #snake #nature
Beautiful misty morning. Stay safe everyone #mistymorning #goodmorning #sunrise