Hanson Bowmen  only recently took on this large wood outside Derby and I must say they have worked hard to develop the grounds. The wood itself looks to be a mature broad leaf woodland filled with a few beautiful old oaks and a carpet of blue bells at this time of year. You can imagine it in summer with leaf cover and bracken. It lends itself to some lovely long shots with 3D deer set in meadows etc.

Sunday saw dry weather and though cloudy it was bright and warmer than recently. My shooting group for the day was going to be made up of myself, Sharon (my better half) shooting barebow, Scott and Zac Ball shooting compound limited and bowhunter. So again I would be the only wooden arrow archer in the group. There were about 160 archers on the course shooting 36 (37 targets as there was a bonus one)
Last time I shot the wood, Hanson had only recently moved in and it was late winter so there was very limited ground cover. They had lots of problems with access and parking for competitors cars. I think it took over 2 hours for all the cars to get out due to the track being so churned up. Since then they must have had over 5 tonnes of gravel dropped off to create an access road and it was so much better. At the end of the shoot everyone got away without a problem. Well done and thanks for all the hard work.

The targets, mostly 3Ds with a couple of Hessian faces had been set out to really challenge people. The course layers had framed some of the shots really well, making the  the archer  shoot through gaps between trees as is the case with the sitting 3D lioness, which is nearly 4 feet tall, but doesn’t look it from the shooting peg .

3D Lioness between the trees

Other shots had you viewing the target  through windows in holly bushes as was the case with the walking bear  which looked tiny until you got up close.

The wood is pretty flat so there were a few long shots at well placed deer or boar 3ds. They also used dips in ground and hollows to catch you out. 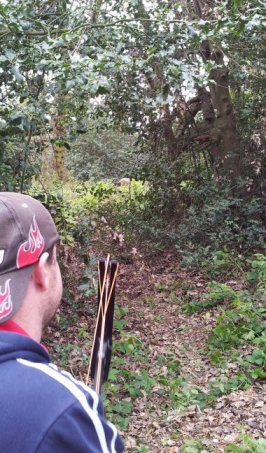 I misjudged one shot at a 3d bear in a hollow and dropped my arrow into its leg rather than chest. But that is good  course laying. 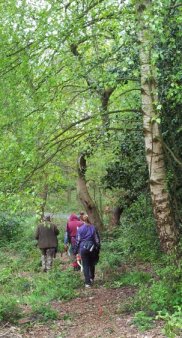 Standing 3D bear between the trees

Our last shot was the 3D cobra which they had positioned in a hollow.
We look forward to returning to see what they change next time.

One thing that was good to see was 3D targets with bosses a safe distance behind to catch stray arrows. This speeded up the search for any arrows that might have missed the intended target. At a lot of shoots 3D targets are put out with no backstop to catch wayward arrows, this results in time spent searching the undergrowth. I know some people say it spoils the look of the 3D but if camouflaged with undergrowth you normally don’t spot them.

612 (2 points off 3rd place) top AFB was 682, so I guess not too bad.  There was an interesting statement made by Scott when walking between pegs. “In last 5 targets the 4 of us in total had shot 22 arrows.”  I was the only one in the group not to get a medal 😦

1 blank and 8 second arrows,  much better than I thought possible with the limited practice I have been able to fit in round work and club coaching (only got to shoot 12 arrows on Saturday). The one I blanked  was a small deer at about 50 yards, with 1 arrow under its belly and 2 to the left of the chest.

You might notice that there was one bonus target which if you hit meant you could shoot a small rabbit. That is why there are 2 scores  for 1 target.
You can see more photos here