The solstice shoot is famous for being both themed and fun, with this years theme being Robin Hood. Some how appropriate for an archery shoot. Little touches like the wanted posters offering 100 gold pieces for the outlaw were dotted round the wood added to the scene.
The course laying team had worked hard to overcome  problems resulting from the terrible wet weather that hit a couple of days prior to the shoot which had resulted in sections flooded, along with treebranches down across paths.

3D Fox though the trees

The tracks were very slippery as one person said Torvell and Dean would have found it a challenge.

The course was made up of 40 3D targets with a couple of predator prey shots that were very nicely set.

The course was very well laid with great use of available cover and framing of targets.

For those not familiar with predator prey targets let me explain. Predator prey shots are ones where you have a predator target positioned to look like its attacking a prey. Here it is a mountain lion against ram.

I’ve said it before that i don’t like lunch breaks when shooting as i tend to go off the boil but on some grounds it is a necessity and lefa is one. Whilst talking food and got to say top marks to all the catering staff for great food, throughout the day. The other thing it did make for was a great atmosphere.

So how did I do? 1 Blank in the afternoon that upset my head and meant that I messed up the next few shots 😦

The only one I blanked on the day. Taken from red peg 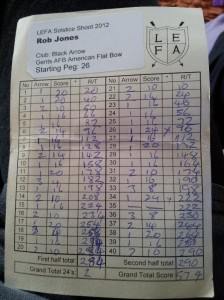