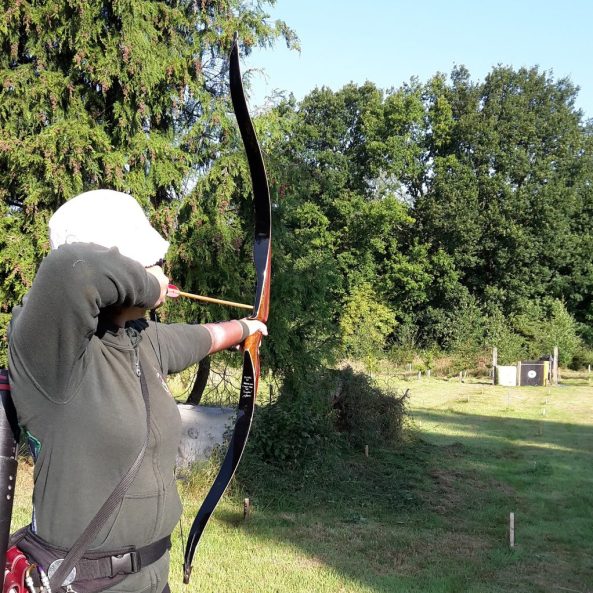 Sharon on the range

Lots has been written over the years and probably will be for years to comes on the theory of what instinctive archery is. Often the authors of articles or books try to define what they view as instinctive shooting, this means there are countless definitions on YouTube, the net, archery books etc. these range from subconscious gapping to shooting without thinking. Many archers question if there is actually anything that is truly instinctive about it.

I recently watched a YouTube video by Jim Grizzly Kent (https://www.youtube.com/watch?v=rDCldJ_YqMk&t=2s) and he used the phrase intuitive archery and this stuck with me.

The reason I think it did was a couple of days earlier I’d been helping a friend who gap shoots set up his bow. He’s recently had to drop his bow draw weight due to an ongoing shoulder injury and had bought some new limbs of a different and lighter poundage to his old ones. Since we have a range which allows archers to shoot back to 40 yards plus it seemed a logical location to help him get himself sorted.

I was watching Steve shoot, noting the arrow flight, release, noting down where the arrows fell for each shot. All starting at 5 yards and moving back in increments of 5 yards. I’d give him feedback on whether I saw him throw his arm or not get a clean release on the shot which would give a false reading etc. 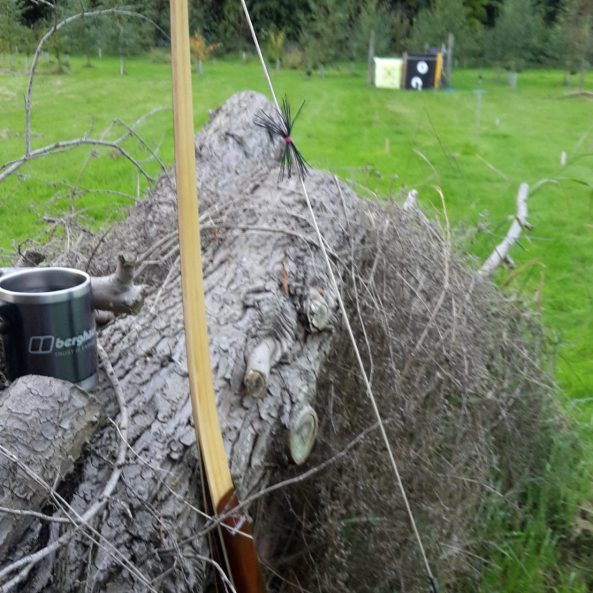 view of the range

Just so you know Steve shoots barebow under the NFAS banner, this means he is not using a sight on his bow, but can use metal or carbon arrows. In Steve’s case he shoots carbon arrows off a very nice Andy Soars Black Brook take down recurve bow.

During the process Steve explained how at 5 yards he would be aiming say an inch or so below the spot, then at 10 yards it might be half inch below, 20 yards it might be point on. This went on all the way back to 50 yards, with him shooting three arrows at each distance, then taking a break before shooting another three. With me noting the distance and observing his form on each shot.

It was as he said at this stage a very conscious process of working out and focusing on aiming but as he said. “The more familiar I become with shooting the new limbs, the less conscious the aiming will be. I’ll stop having to think I need to be 3 inches above”

For me it was interesting for two reasons.

Firstly from a coaching perspective, hearing how he explains his approach and process, along watching him execute this shot. Steve is very good at explaining his shooting cycle and stages.

Secondly from an instinctive archers viewpoint it was interesting to hear his explanations of how he gaps and works out how to aim or rather where to aim.

One advantage to this process of shooting Steve highlighted was it gives the archer a fall back plan if for any reason they to take a break from shooting due to work / life / health reasons. Their gaps will remain the same (so long as the arrow specs, draw dynamic and limbs are the same). The downside of this technique I’ve been able to identify cover consistency of the archer or equipment. Like all archers you must ensure you can perform your shoot cycle consistently.

If you change your arrow spec this may and probably will affect your gaps as a heavier arrow would fall faster so for longer shots you’d aim higher.

Whilst I don’t gap shot I do know that when I shoot I try and do a couple of things.

On longer shots I try to envisage the arrow flight to the target. How it will climb and fall hopefully into where I’m wanting it to land.

Shorter shots I know how it will appear in the target as if by magic. A friend when he saw me shot once said you don’t anchor you draw up set and release in one movement, which is something I know I do when either at short shots or when I’ve been practising a lot and on form.

I know when I stop shooting for a couple of weeks or longer then my eye, subconscious distance judgement, instinctive aiming  or whatever you want to call it goes and I feel I’m a bit rusty.

Anyway I thought some of you might find this interesting, have a look at Jims video and a read of the different authors thoughts on instinctive and a gap shooting.

6 comments on “Instinctive Archery – is that the right description?”