Over a hundred and twenty archers joined us on a sunny Sunday morning for the Pete Bates Trophy Shoot. We had good weather though you can feel the autumnal nip in the early morning air starting with the leaves just beginning to turn behind the club house.
Centaura has a small wood situated not far from Derby with a course made up of a mix of a few 3d targets but mostly paper faces.
Our shooting group comprised Neil and Mandy from Forest of Arden, joined Sharon and myself.
Our First target was a red squirrel between the trees and I must admit that I did wonder if was going to be a good start.

In fact the day flowed well with few hold ups and there was a very relaxed atmosphere not dissimilar to the wooden arrows shoot they ran a few months back (shoot report can be found here).
In fairness I think we might have started on the small targets as the first 7-8 targets were mostly group fours including the red squirrel, jay, reflective duck, and Partridge.

The course is situated in mix leaf deciduous woodland with mostly flat terrain,  though there is the quarry section which will see going up and down there steps and presents the opportunity fir some nice down hill shots.

Due to the nature of the course Centaura operates a lunch break of an hour which gave archers ample time to enjoy the sunshine and have a bite to eat. Sadly the long lunch break did have a negative impact on my shooting as it a while for me to get back into the swing of things again. 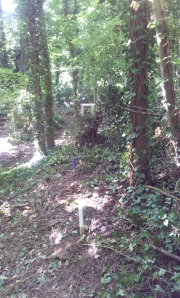 By lunch we had shot 19 targets and had finished shooting the course by 3:30.

Sadly I only managed second in hunting tackle with a score of 654 30 points behind first. Well done Roger. Guess it’s not too bad considering in the last week I’ve fitted a new string with 2 less strands, made some new arrows, started a new glove, set a different bracing height for the string and obviously had to set a  nocking point.
Only criticism of the course was I think they could have put a wider selection of target faces as there were a number of repeats. With the selection of faces on the market I don’t think clubs need to repeat any.
In all though it was a good shoot and a good day. Thanks to all the club and I’m sure Pete would have been proud of you all.
As always thanks for reading.