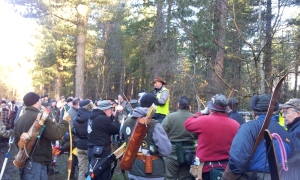 Seems ages since I wrote a shoot report but then again it’s been ages since I’ve been to a shoot.

Spirit of Sherwood were hosting their Christmas shoot and it was to be a wooden arrow only one. It’s a long drive for us but Karen kindly put us up for the Saturday night returning our hospitality for when she crashes at ours for Svyf shoots. Huge thanks for cooking us a great meal, camp fire stew yummy.

We hadn’t shot Spirit of Sherwood for a few years and the club has struggled recently due to forestry work taking place in their woods. Considering that they put on a great course with some clever shots using tree stumps from which you shot or on which positioned the targets. Loved the longhorn ram, looked great. 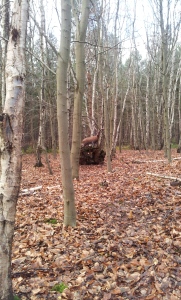 Our shooting group would be made up of Dave and Lynn Sabo who we had had the pleasure of shooting with before and Paul who was on only his third nfas shoot having just swapped to wooden arrows.

The course was to be a mix of 3d and paper faces set in a clover leaf formation so you would pass catering 3 times. The result was an easy flowing day with no hold ups or delays with everyone having finished and getting away by 3:30. Not bad when you consider there were over 140 archers. We were also lucky with the weather having only a brief shower in the afternoon.

First target was not a great start for me. I  blanked it,  think the lack of practice and distance judgement being to blame as my arrows flew over and under. 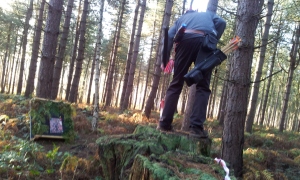 Second target of the day, Dave taking shot off an old tree stump.

There was a really relaxing atmosphere and good spirits, maybe it was the festive season or simply because everyone appeared to be having a good time.

There was an interesting moving target which was a large 3d crocodile wished I’d taken a photo of that now. Suspended on pulleys a few inches off the ground it looked really good as it slid down the slope.

Sharon won ladies hunting tackle so has another trophy for the mantlepiece. I only managed second in gents class missing out by 6 pts. Still a personal best for thirty six targets 686 despite a blank. Would like to make a special congratulations to Chris Harley who shot her first round with no blanks. Well done Chris.
Thanks for reading, have a Happy Christmas and Good luck for new year.

One comment on “Shoot report – Spirit of Sherwood – December 2014”