Okay so this may come across as a bit of a fanboy write up of the shoot report for Hawk but I will freely admit that I really like Hawks grounds and the shoots they host. A fact any regular reader of this blog might already be aware of.
Those of you haven’t read my write ups before might be thinking “Why do I like the shoots so much?”

Well I find the courses challenging not because targets are stretched, but because they cause the archer to read the ground, the inclines etc. and try to factor that into their shots. In essence that is the appeal of field archery to me. Hawk course layers force you to focus and push yourself, in a good way. You can have a read of previous shoot report here if you are interested, hopefully you are.

The last report was from a couple of years back as they didn’t run an NFAS shoot last year, which was a real shame, but I know they were busy setting a course for WFAA .

I know that many archers that have shot Hawk can find the ground challenging to get round and the shots difficult, not because of the distance but the landscape and terrain. Even those used to shooting on an incline will find Hawk a challenge but I truly believe that it is well worth exploring this Welsh hillside. If you are wanting to test your archery skills, head to their next shoot.
Interestingly at their last shoot I know one reader of this blog was talking about this to another archer at the shoot. She had searched for Hawk Archers on the internet, and found this blog, with the write up of previous shoots, so they had an idea of what to expect.
So enough of my rambling, let’s get onto the important stuff and the actual shoot report for Hawk Archers.

So being in Wales it is appropriate to start with a comment about the weather. Heavy showers had been promised but thankfully those we had early in the day weren’t a problem and cleared quickly, leaving a warm dry day. Yes dry day in Wales. 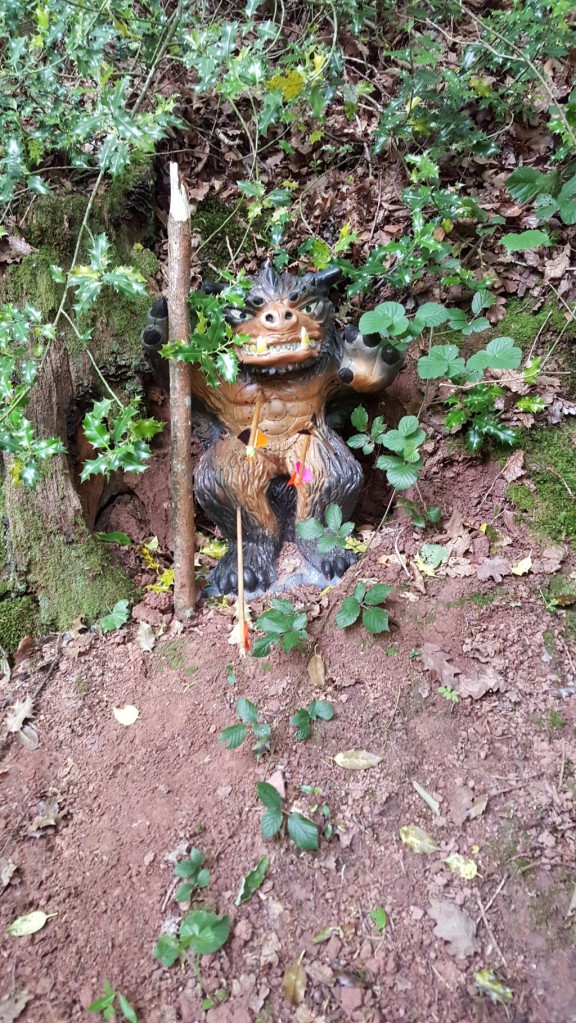 Troll in a hole

As always there was a very friendly and relaxed atmosphere at Hawk shoot and this time it was great to see so many people there, since traditionally Hawk shoots are quite small. This time there were over eighty archers attending.
Our shooting group for the day would consist of Luke and his dad Ant both shooting in the primitive class. I know that some archers find shooting with juniors difficult but Luke was a great sport and coped with his new bow really well.

This year Hawks course would be a 36 target course with a mix of 3ds and a few paper faces, with a theme of Dragons this year. One of which was a huge 3D red dragon on the hillside, along with a black dragon and a couple of really cool custom paper face. 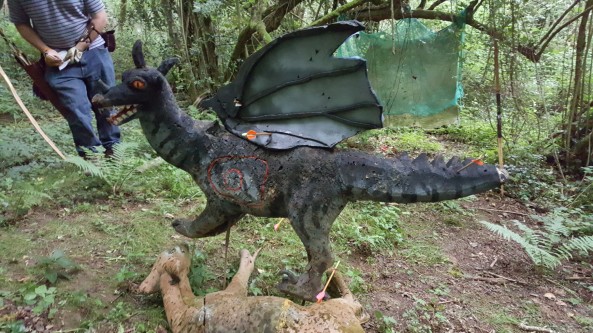 I guess the giant red can’t have been that huge as it took me 3 arrows to hit it, with the first two landing just at its feet. (Must have been the Welsh man in me not wanting to shoot our national flag)

The shoot would be a shoot through with you passing the catering hut twice, where you could fill up on supplies before heading off again. Only downside this year was the lack of their homemade chilli, which is usually great.
Another very cool custom target made by the guys at Hawk was a two headed wolf, that was amazingly detailed and well sculpted.

Hawk was also the first opportunity for us to catch up with some of the archers who had shot our 3D course and find out their views of the course, which appears to have been very favourable. I will put an write up on what happened when I get the chance.
Despite having not touched a bow very much over the last few weeks, Sharon shot well, winning ladies AFB and despite not picking up a bow in what seemed ages I did ok and won gents AFB. 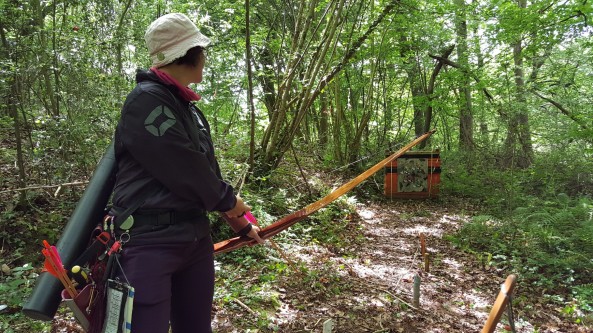 Sharon on the practise bosses

This year Hawk introduced a memorial trophy in both gents Bare Bow and American Flat Bow in memory of past members. I have to say I feel very honoured to be the first person to receive this new AFB trophy in memory of Bob Nourish.
From what I understand Hawk will be one of the teams setting a course for this years NFAS National Championships in September, which going by their normal standards should be a great course.
Thanks for reading