So August is normally thought of as the height of summer in the UK, but I can’t say it really felt like it when we set off. Thankfully it remained dry through the day, if a little chilly first thing, though it did brighten up later on. Since it is a good two hour drive for us, if the motorways are clear, we decided to travel up the night before and stay over in Worksop. I don’t know what it is but the UK motorway network seems to be having more and more roadworks and temporary speed limits. 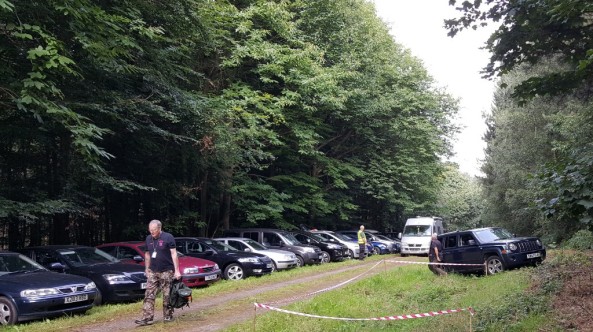 So there are few things in life that can be relied upon. Normally the phrase includes birth, death and taxes. Well maybe Spirit of Sherwood shoots should be added, as the ones I have attended have always been good, with targets well placed, not stretched, admin organised, along with good marshalling from start to finish. This Sunday was no different, even at the end when the admins had to resort to doing everything by hand due to computer problems it worked. I think the only thing that let them down was the catering van they brought in, who were quite slow and seemed to run out quickly.

Those wanting to read a previous shoot report can find a link to one here. As I write this I’ve realised I never did write a shoot report for last Decembers wooden arrow shoot at Spirit. Sorry.

The course was a mix of paper faces and 3D targets, organised in a clover leaf formation round the central point. This would mean we’d pass the catering stop a couple of times whilst navigating the 40 target course.

With I think over 200 people attending the shooting groups were quite large with 5 archers in most. Sunday would see Steve and David from Lincoln longbow, two comparative newbie archers having been only shooting for about 12 months, joining Harry shooting compound Unlimited, Sharon and myself.  We also had Mathew Harry’s grandson with us, enjoying a walk round as he wasn’t shooting.

The course itself was challenging without the targets being stretched, with some clever use of bracken as cover. Speaking of bracken, Spirit course layers covered all the bosses with foliage making them disappear in to the background. I especially liked the paper deer they set behind the shade of a bush, which made it very hard to identify if it was a 3D,2D or paper face. Vey cleverly set. 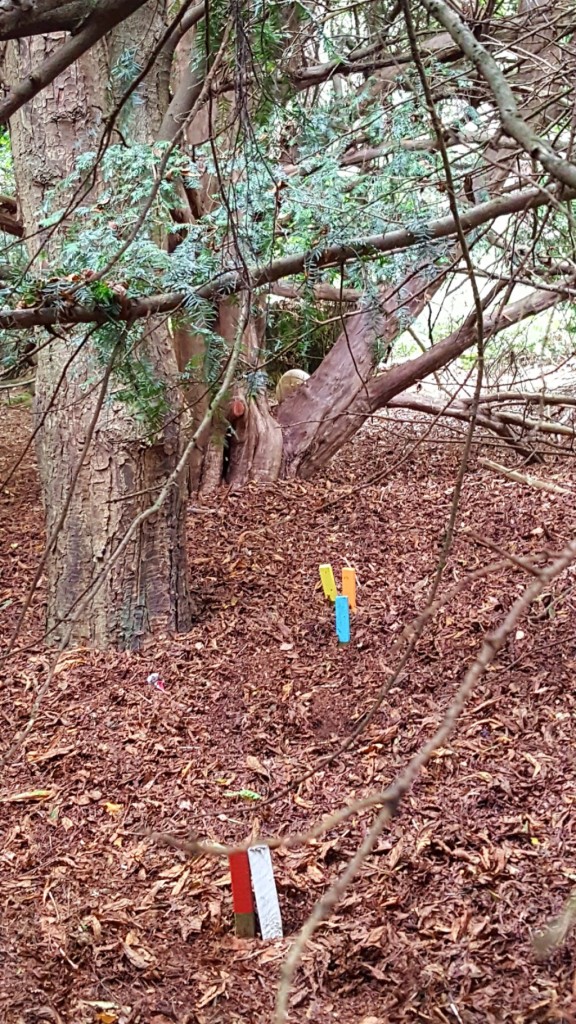 3D bobcat target between the trees

Another well set target I thought was the black bear 3D on all fours which was set in a clearing, see photo. It looked good and I always think that is part of the battle when making a course work.

3D black bear between the trees

I seemed to have a day of not quite judging the distances correctly, probably down to the lack of practise I am getting. Though I have to say it also could be down to the clever course laying. I seemed to get a lot of sixteens but very few twenties, with my arrows landing just over or under the higher scoring zones. 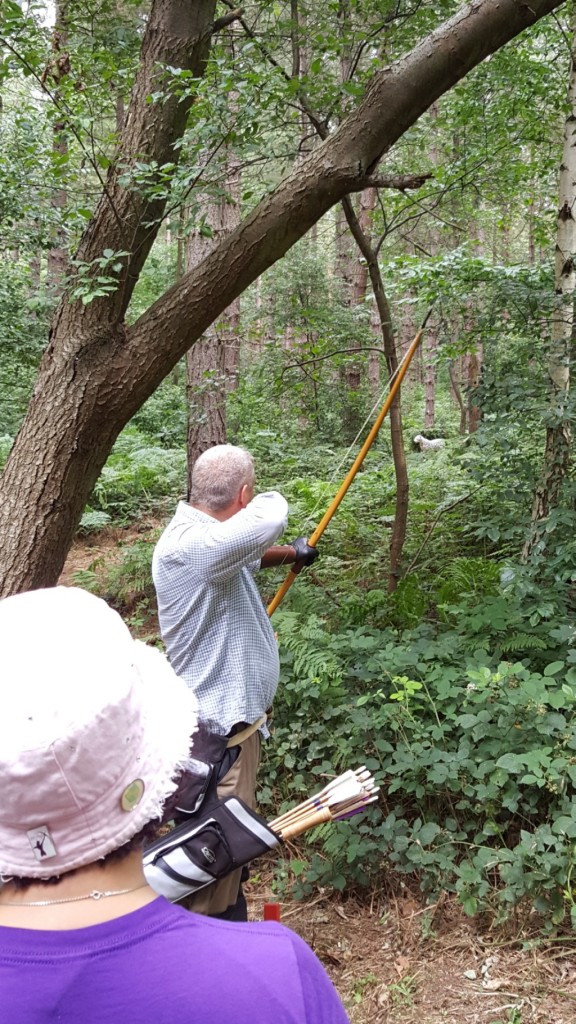 Spirit of Sherwood normally have some form of moving target and this time it was a 3D crocodile which I am surprised to say  I managed to hit. Normally I don’t fare well on moving targets. I know some groups found the day quite slow, which I think is inevitable when you have so many archers. We kept a steady base throughout the day, with our only real hold up being at the second food stop, where the groups in front had stopped for food.

Special thanks should go to young Mathew for volunteering to carry the 3D target we finished on in by himself, thank you. Here’s hoping you have a great birthday in a few days. Sharon and I shot ok, with Sharon winning ladies AFB and me scraping a first too. Thankfully the drive home afterwards  wasn’t too problematic, so in all a good day.

On a beautiful bright spring Sunday morning we loaded up the car for an hour or so drive up the motorway to Lyme Valley Archers NFAS shoot. This would be my first shoot since Spirit of Sherwood in December last year and to be honest I was more than a little nervous.

For those who are interested here is a link to a previous shoot report. Lyme Valley club always put on a challenging course, helped by their ground which is a steep sided wooded valley outside Stoke-on-Trent. Thankfully this year the weather was warm and dry being more like summer shoot conditions than spring, the grounds and paths can be a bit slippery in the wet conditions.

Joining us to form our shooting group would be Paul and Claire from Long Eaton Field Archers, both shooting unlimited (that’s a compound class with all the whistles and bells). They were great company throughout the day which helped make for a relaxing and enjoyable shoot.

The view from the valley

Lyme valley is always a popular shoot and this day was no different with well over 130 archers attending. I thought it went quite smoothly for us anyway with no real delays or hold ups until the end of the day when I think everyone was feeling a bit tired. Though I know a couple of archers chose to leave at lunch as they were finding it very slow going. It was great to see Jim smiling and enjoying shooting a flatbow again.

The event has a lunch break from 12:30 to 1:15 which see all archers stop shooting and walking back to the entrance for lunch. Though this can be disruptive and I’m not a fan of lunch breaks, it is necessary at this clubs grounds due to the geography being such as catering is at one end of the wood and you only pass it once. We were very fortunate in being near catering when the lunch horn went off. 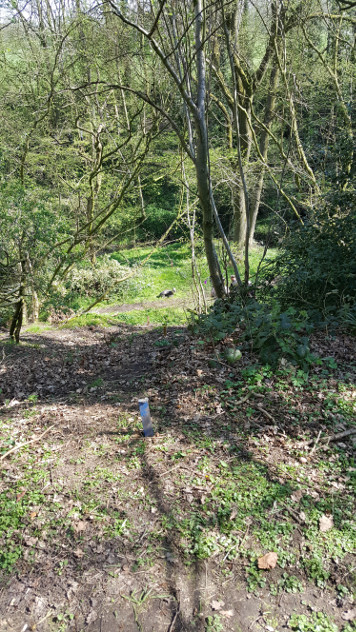 A couple of shots I think  worth mentioning were the downhill bedded antelope, along with our first target an uphill lion right at the end of the wood.

First shot of the day, 3D cat between the trees.

The 36 target course was a mix of 3D and paper targets.

3D Dragon emerges from an egg

Speaking with a couple of Lyme Valley club members the course had been set by new coarse layers and I think they did a pretty good job. There were a number of challenging shots, offering up and downhill challenges for all, something that not many clubs can offer. Personally I think with a couple of small changes to the route or standing places for groups it might be even better and feeling less cramped between targets. 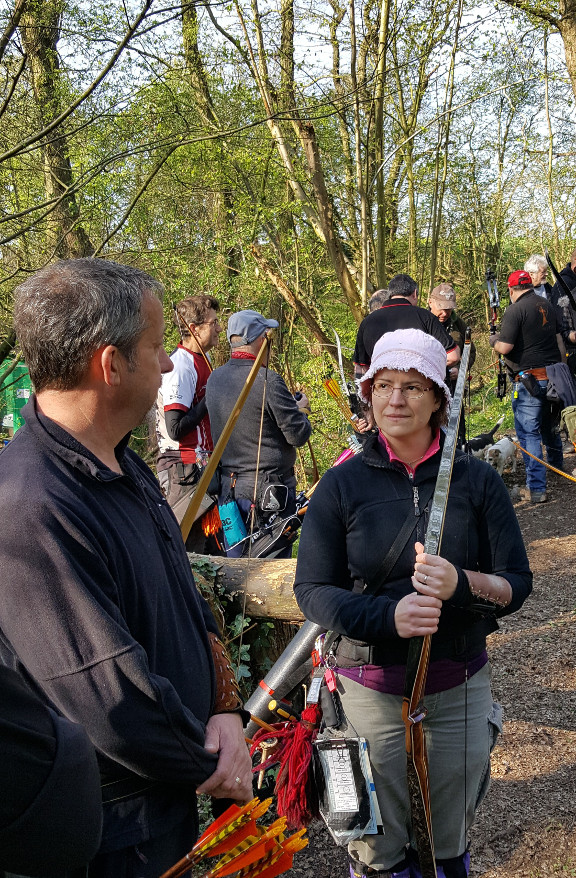 Jim chatting with Sharon before we start.

If you want to experience a different course with ups and downs then Lyme Valley is a good course to go for, just be aware it can be quite physically demanding to be going up and down the slopes. Though I think Sharon and I were feeling tired before starting, having spent the Saturday from walking round Derbyshire woods scouting shots for the 3D championships. 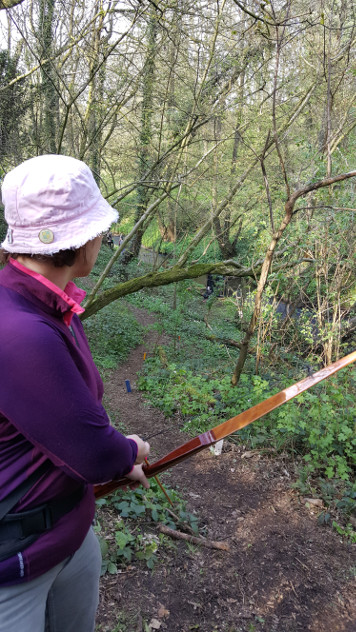 Sharon on the Last shot of the day

Despite feeling tired Sharon shot really well, winning ladies AFB. I even managed to scrape a third in gents AFB. Once again our thanks to Paul and Claire for their company and to all of Lyme Valley for their hard work. All contributing to a lovely day out shooting, made it good to be back.