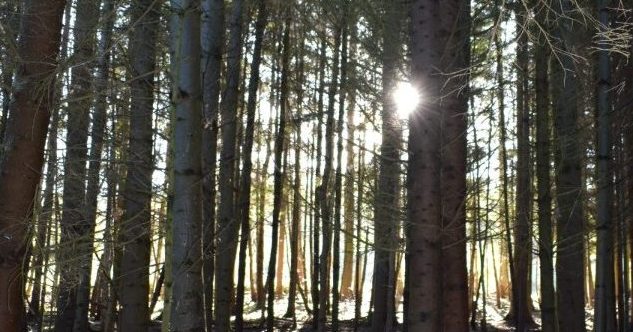 Sun through the trees

This was another shoot where I would be behind a camera rather than a bow, but I wanted to get something written and out there as I feel its worth promoting. This isn’t an NFAS club by run Barry Cheadle who does all the course laying and preparation.
Situated at Bower Hill, Nr Button Oak its about a 45 minute drive for us, depending on the traffic. In fact it wasn’t the traffic that delayed us but the weather, as when we were packing the car to leave we were having to scrape the ice off the outside, that was  once we got that far as the padlock on the gate was actually frozen. Anyhow lets get back to the shoot report. 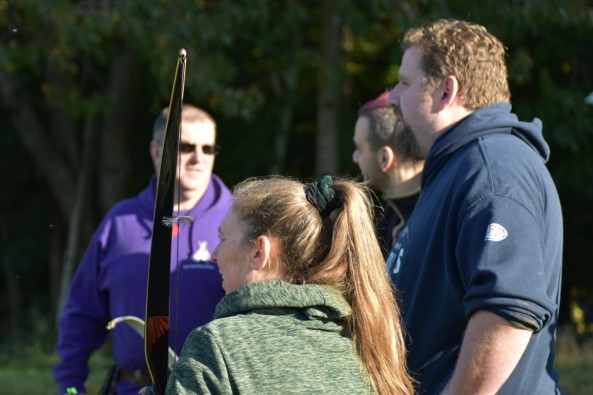 The course consisted of 30 targets, all of which were 3D targets ranging in sizes from some small rabbits to wolves, not forgetting the small carp set in the stream.
The grounds are a hillside which comprises a mixed woodland and sections of confers, offering a variety of terrains and lighting. 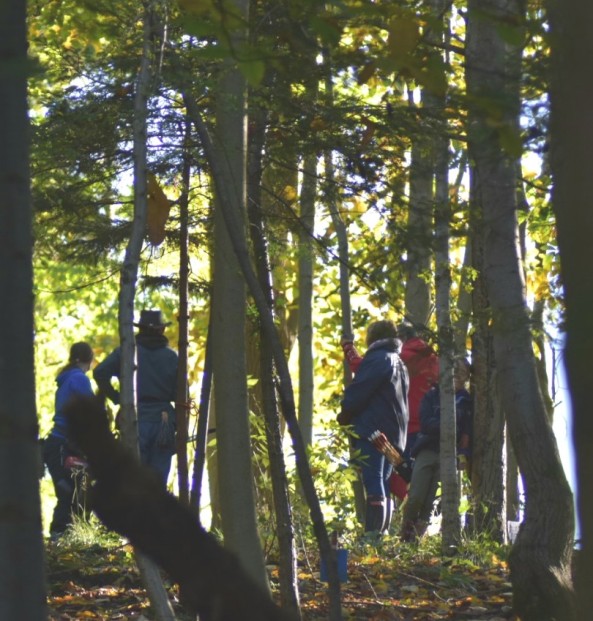 Archers in the woods

One negative comment I will make and to be fare was completely outside of Barry’s control. The previous day the area, like much of the UK had had very heavy rain. This made some of the paths and routes through the course quite treacherous underfoot, with them resembling streams rather than pathways. I know Barry is looking at this for his next shoot and as I said I don’t think he was expecting the weather we had the day before. 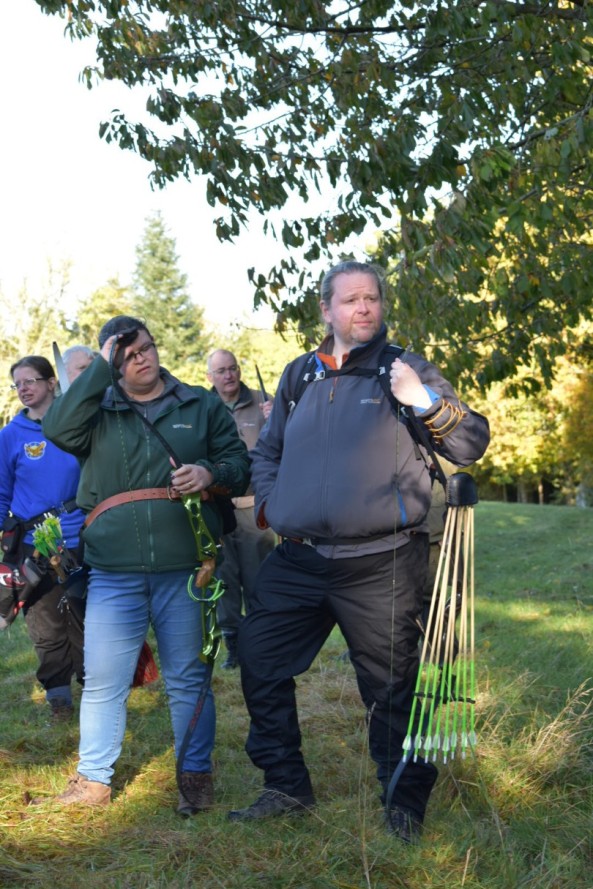 Archers waiting for the off

This wasn’t his first shoot and I was glad to see the course numbers were up from previous shoots he’s organised with there being over 40 archers all of them shooting unsighted classes. 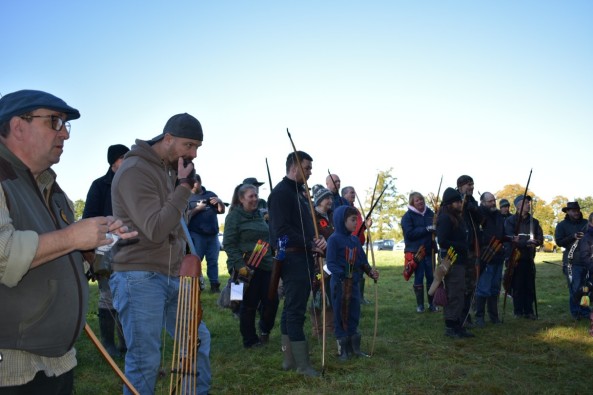 The scoring system  was different to other competitions but was easy to follow. Barry combined elements from the NFAS and  Border archery competitions. You got your shooting peg on which there was one for an adult and one for a junior. You shot your first arrow and if you were in you were going to score 15 points if in the animal or 20 points if in the kill /  central marked zone. If you were not successful of your first arrow you can take a second row from the same peg, with a potential of 5 points or 10 points. This made it very easy for both the maths and also for newbies or experienced archers. It also made for a pretty fast shoot, which is ideal in the winter months. 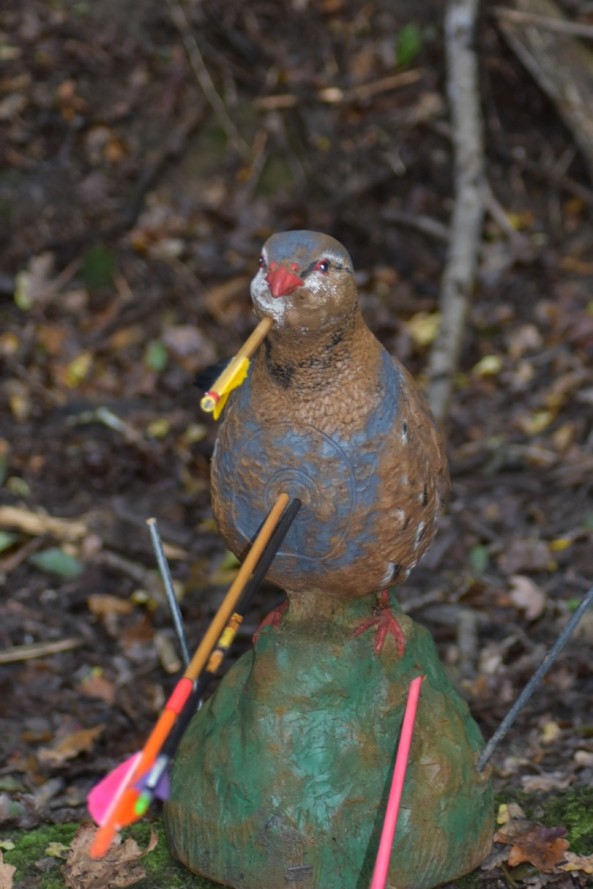 Unlike the NFAS you weren’t having to move pegs and it meant you could try and adapt for your second shot if you need one.  I wonder whether it makes it a bit easier for the course layer too as you set your shooting line and have less issues with different positions along that line. I’ve commented already on the weather on the previous day and early morning but have to say that Sunday was a truly glorious day with bright sunshine if a little on the chilly side.
As I said getting round in a few places was quite challenging due to the previous days heavy rain fall. I think a few more direction signs might have helped too as Barry was using new areas of the woodland. 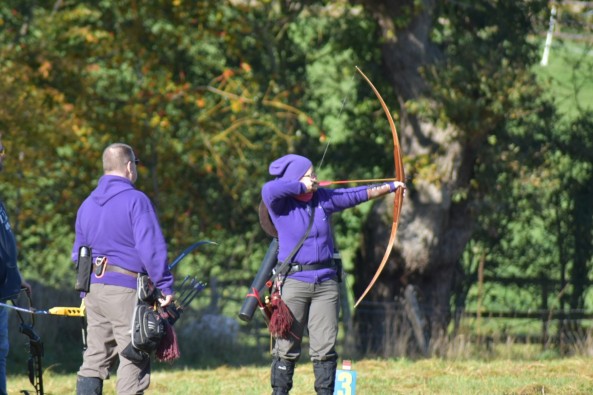 Archers in the field

Not all targets were in the woods somewhere outside in fields making for a bit of a nice mix. He also has the ability to shoot out from the wood into fields or from fields into the wood which offers a nice contrast. 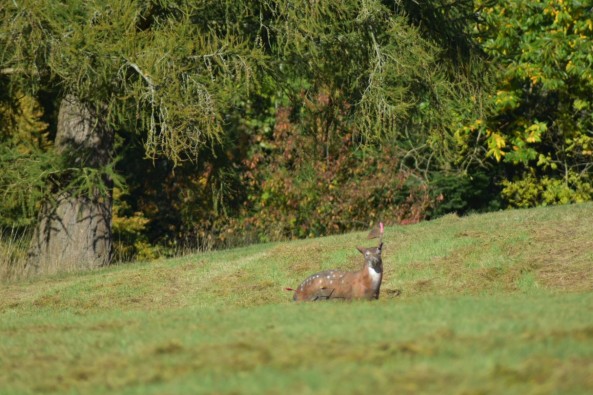 There weren’t that many long shots, by long I mean over 30 yards but I think it is quite a technical course and works well for developing skills.
I hope Barry will run future shoots as I’ve been to a couple of his and each has improved on the previous. He asked for comments and feedback and I think he’s received lots, the majority of which have been positive and constructive in any criticism. 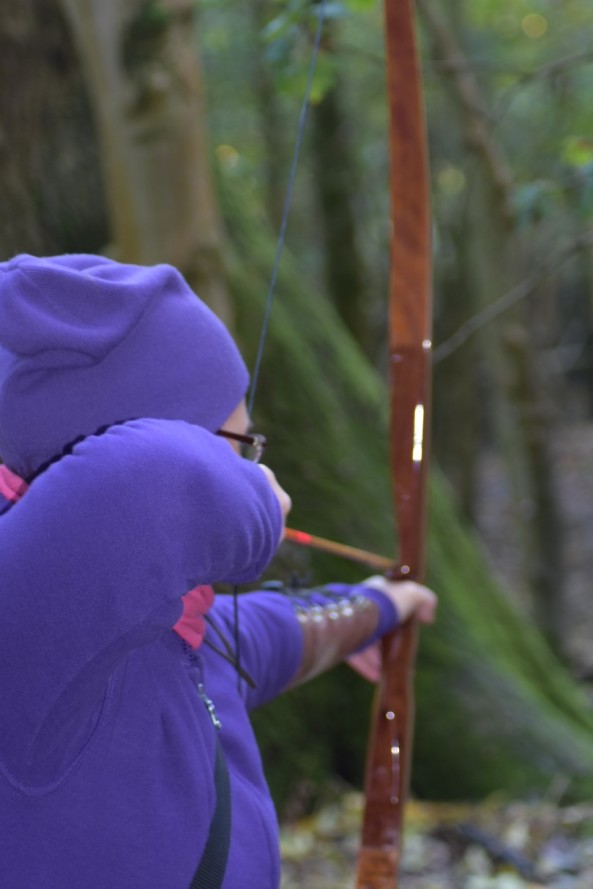 One interesting thing Barry has to do, which is the same as we have to at our shoot grounds is to mark any deer targets. He actually puts some coloured tape around the ear all the neck to signify it is actually a target, as his area has a small resident wild herd of deer which occasionally puts in an appearance. 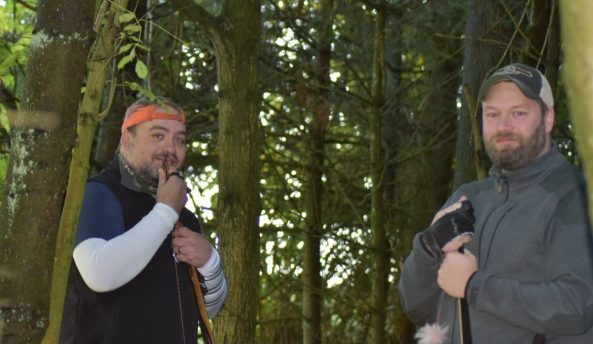 On the peg waiting for the start

In all I think it was  a really good day I think the only downside was if the fact that it was 30 targets without a break I think maybe in future he could reorganise the paths so that you can have a break halfway around.
Considering this has been set by one person I think it’s done really well and want to wish him the best of luck in the future.
Thanks for reading.