I tend to see the Spirit of Sherwood Christmas shoot as the end of the year as far as NFAS shoot calendar is concerned, which is silly really as NFAS shoots carry on all through the year. However for this reason and because they put on cracking shoots, we always make an effort to get to their shoots and this years was no exception.

As it’s a good two hour drive for us to get up to Spirits grounds we decided to head up the night before and stayed over at a local travel lodge in Worksop. As it was, the drive up on the Saturday was quite unpleasant being very grey and drizzly all the way, though not as cold as it had been during the previous week. I’m glad we did the drive on the Saturday as I wouldn’t want to do it early in the morning. Have to say the weather didn’t help the splitting headache I had had all day and would have for the next few days.

Spirit of Sherwood shoots are always well attended, with shooting places being booked up several weeks in advance and this one was no exception. This would be wooden arrow only and a Christmas themed shoot. There were to be 36 targets on this course course consisting of a mixture of 3D targets, with a number of novelty shots.

If you like, you can read a previous shoot report here from one of their shoots earlier in the year. It was great to catch up with some friends, like Jim Pierce. Just trying to remember Jim, did you start on target peg 8 or 9?

Thankfully the damp grey weather of the Saturday was replaced with a mostly dry sunny Sunday and warmer weather than we’d experienced during the week.

3D deer between the trees

The shooting group joining Sharon and myself for the day would include Kevin and Carolyan from Pines Park shooting Hunting tackle and american flatbow respectively.

Spirits ground is a flat woodland of a mix of confer and deciduous trees, making it a pretty easy to get round. It’s quite a pretty wood with the winter sun shining through the branches, though at this time of year the days of sunlight are short, so they tried to start early to give archers the best chance to finish in good light.

Can you hit a barn door

Spirit course layers always set a moving target to challenge archers, last time it was a 3D crocodile. This time they had made up a moving barn door, literally suspended on a cable. If you missed you were awarded a sticker. After all we all have days where we can’t hit a barn door. I thought this was a great fun idea for a novelty shot.

If you missed the barn door you got the sticker

Of all the 36 targets I think there was only one that I really didn’t get on with and to be fair it wasn’t the target as such but its positioning. It was one of the novelty shots where you shot one arrow and had to choose to shoot a large bear for 20 points, a penguin for 30 or a small fish for 40. The reason I didn’t like it was because in the distance you could see archers moving and this caught my eye when I was shooting. Don’t get me wrong, the shot was perfectly safe as they always are at Spirit. It was just the moving archers caught my eye when I was shooting, which is something that I don’t like and find very, very distracting. It is something that I really struggle with this on some other shoots. 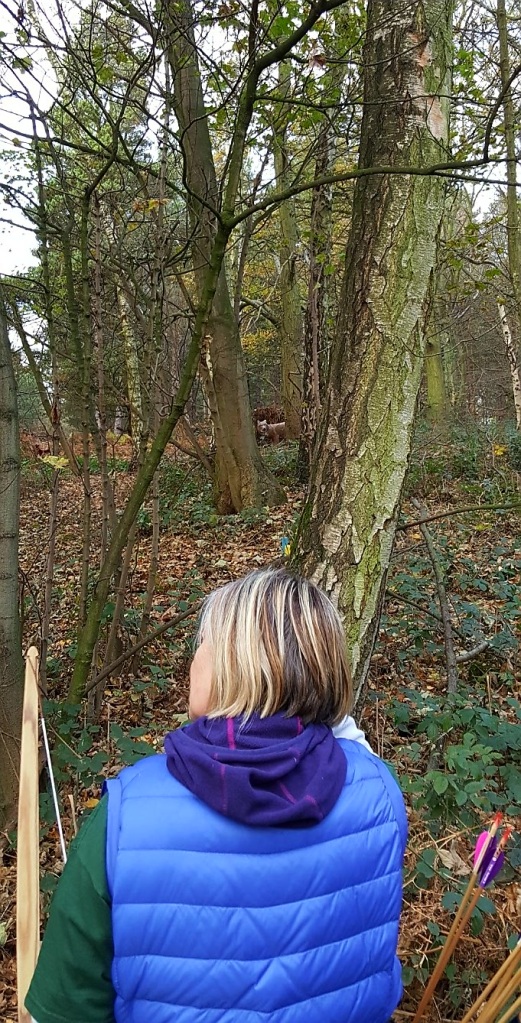 3D wolf target between the trees

Other novelty shots included a mini tower from which you could shoot a predator prey shot of knight and dragon. 6 of the 36 targets novelty targets, including moving shots, predator prey and pick and stick ones. I’m normally not a fan of lots of novelty shots but this was a Christmas fun shoot and think it worked.

Predator Prey shot from the castle

The course itself was arranged in a rough clover leaf formation of three loops, round one central point, giving the competitors the opportunity to pass catering two or three times. This makes it possible to have a pretty effective shoot through with few if any hold ups, for us at least. 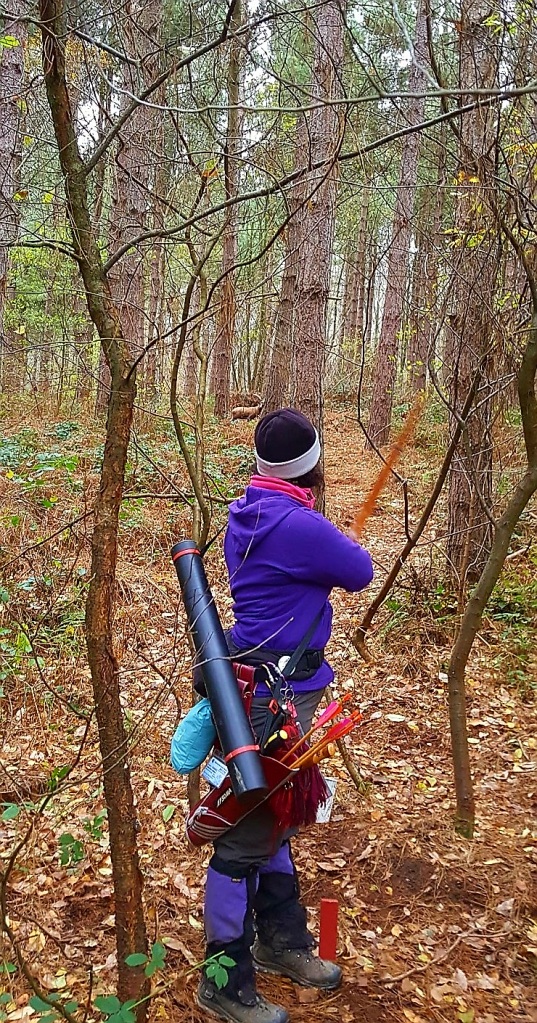 Sharon shooting a 3D deer at Spirit of Sherwood

The course layers at Spirit had gone to a lot of trouble in setting the targets and they had set a really nice deer herd shot of different size and angled 3Ds set between the trees where  you had to select the target to go for, decisions, decisions.

Another target worth mentioning was a large Raven 3D they had set on a tree stump, again framed very nicely. 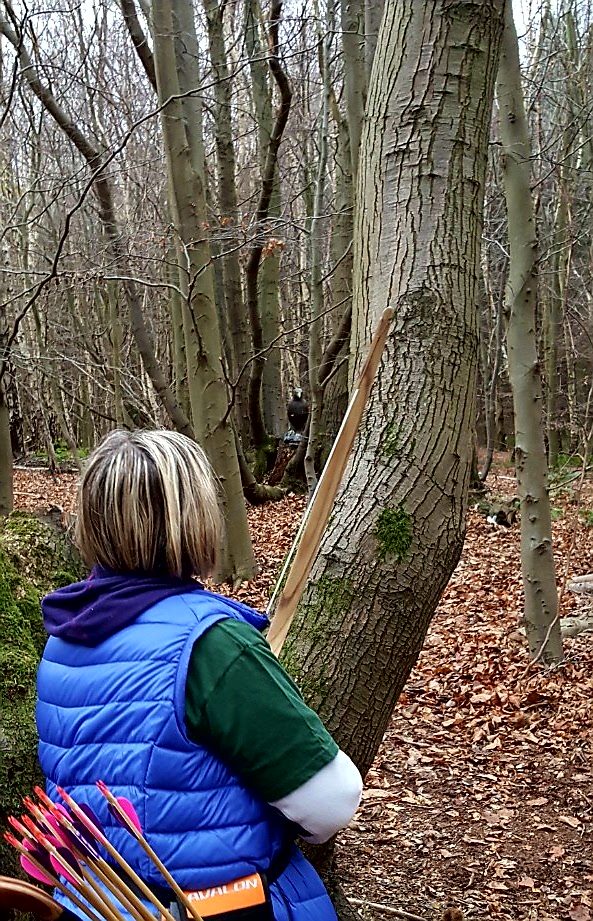 3D raven on the tree stump between the trees

The Spirit club had also set out a couple of boxes of chocolates at different points round the course for archers to help themselves, a very kind and generous gesture.

Boxes of sweats could be found round the course

I don’t feel any of the targets were particularly long shots, and one thing they did do well I thought was how quite a few of the targets were nicely framed between the trees. This gave the archer a corridor view, making them look closer or further than they were. They had obviously considered the canopy for low poundage bows on all the shots, something that not all shoot organisers or course layers do. The result were several targets set at sensible distances whilst remaining a challenge and more importantly enjoyable. It’s good to see course where targets aren’t stretched or 3Ds are angled to make them near impossible.

Pick your target the 3D zebra or 3D cheetah

We went round pretty quickly with no hold ups other than looking for the occasional wayward arrow that preferred the undergrowth than the target. 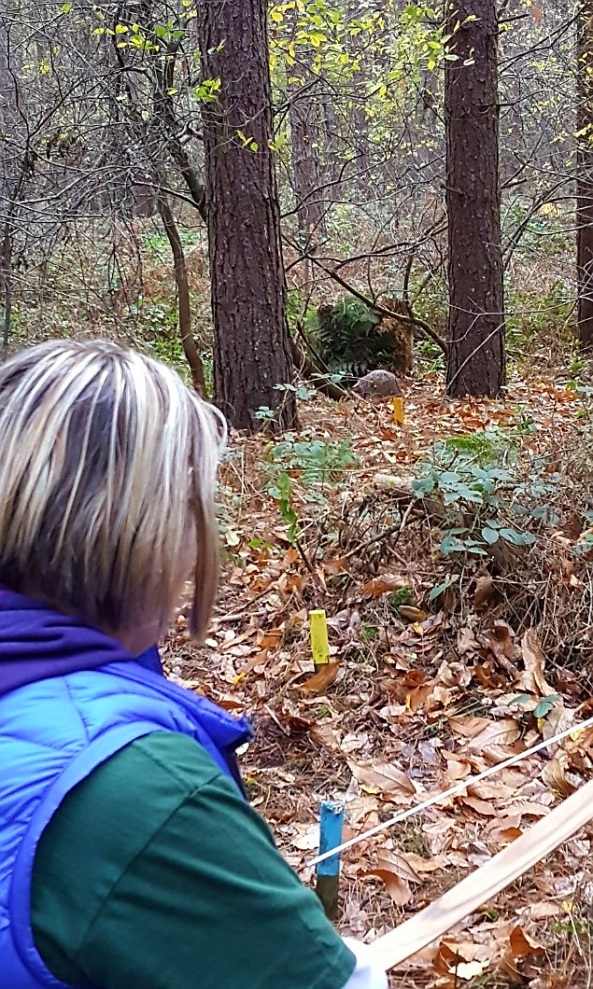 3D porcupine target in the leaves

Night draws in quickly this time of year, so by the time we got to the raffle and prize giving it was already dark. Fortunately as it was a wooden arrow only shoot there were only a few different classes. Following on from the Christmas theme of the shoot, Spirit were doing Christmas themed prizes for first place, Christmas puddings no less. I don’t think anyone will be surprised to hear that Sharon came away with one as she won ladies American flatbow. Have to say that I was surprised in receiving a Christmas pudding as I didn’t expect to win gents flatbow.

The journey back took a couple of hours, but as always its well the drive.

I’d like to take this opportunity to wish you all a very Happy Christmas and Good Luck for the New Year.