Centaura Bowmen’s ground is over an hour drive from home on a good day, so it would be an early start for us to make sure we got there in good time. It is a ground we know quite well, situated outside Derby. For those interested you can read a previous shoot report here.

As it was it would be a warm and pleasant early autumn day, with great company as we were joined by the recently married Mr and Mrs Hands, shooting traditional bowhunter and bowhunter respectively. Congratulations to you both again, it was a great wedding.

Since our last visit to their grounds Centaura course layers had worked hard on resetting sections of the course, not easy in the confined space they have to work in. There were a few familiar shots for those that had visited before, such as their very short shot on the weasel. Overall I feel the hard work paid off and the changes worked pretty well, though maybe a few more arrows or red and white tape to clearly mark the new routes would have helped, as in a couple of places people tended to revert to old known routes, which now were defunct. 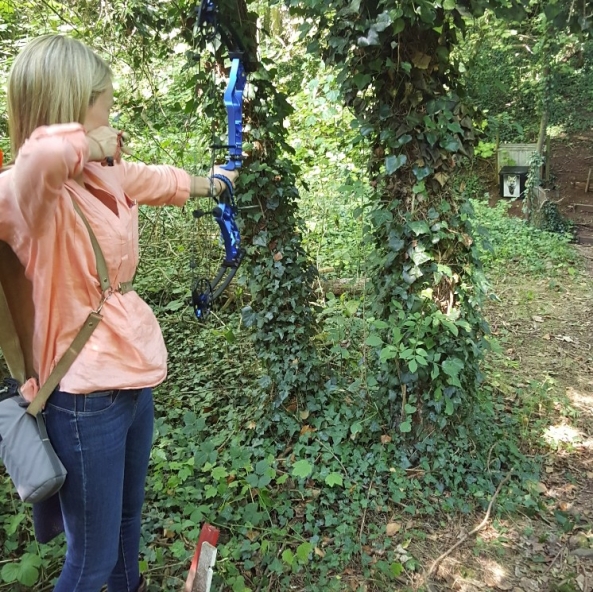 The course itself consisted of a 36 target course comprising a mix of paper faces and 3d targets. Many of the paper faces are custom faces produced in house. These have generous lines but some were a bit small for the distances they were set and not that clear to make out, like the chicken, yes chicken target. This was a light brown bird on a brown grass background. Another that sparked debate as it wasn’t that clear was the black badger on a black background, on a black boss.

There were a couple of predator prey shots would allow you to boast your scores if you were lucky enough to get the predator with the first arrow. 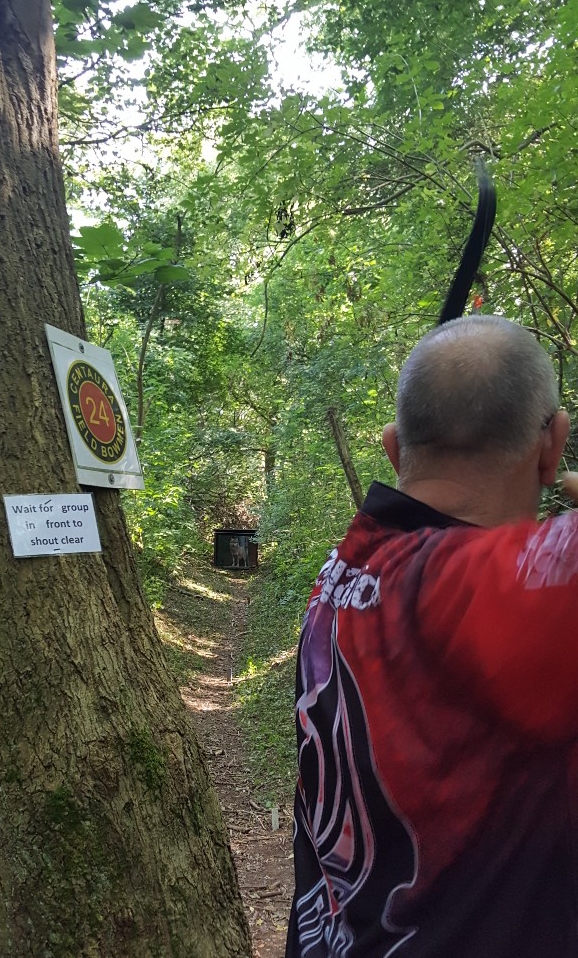 As I have said in previous shoot reports Centaura operate a lunch break as otherwise due to the route round the wood you would only pass catering once in the day. On this occasion they set a lunch hour break from 12:30 to 1:30. Maybe this was a bit too long but, it allowed archers to get back to the muster point and grab some food without having to have to then rush back out for the restart. This made for a more relaxing lunch break allowing archers to chat over a coffee and sandwich.

One thing I think the organisers do need to do is marshal the lunch break stop carefully. At 12:25 they sound a horn to inform archers to finish shooting the target they are on. Archers were instructed at muster not to start walking off course until the second horn sounded at 12:30. This was to ensure archers could walk safely off the course. Unfortunately not all archers followed these instructions, meaning some started walking off at 12:25, worse still some took short cuts across the course using old paths. I know I stopped one group who were walking off early.

As is pretty normal for Centaura the shoot was well attended with over 100 archers. The reworked course flowed well with no obvious hold ups though it was a little slower in the afternoon, possibly because it was post lunch or because we entered the area of the course which had quite a few smaller faces.

We, along with many other groups had shot 20 targets of the 36 target course by lunch break.

Despite being so well attended or maybe a testimony to good organisation involved, it was an early end with us leaving by 4:30 pm after all the prizes and raffles had been awarded.