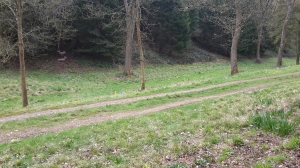 So Sunday saw us heading south on the motorway to Highcross clubs ground. Though Sharon had shot Highcross once before, it had been at their old wood, so this would be a new venue for us both. It was nice to visit somewhere new as everything is completely unknown.
Fortunately the weather was good, with a slight chill in the air it did feel cooler that earlier in the week. The good weather did mean I was able to get quite a few photos.
Unlike other shoots where there are upwards of 150 archers, Highcross had some 60 archers which made for a relaxing and easy shoot.
Highcross have a lovely wood with a 36 target course set up with targets 1-18 paper faces and 19-36 3d targets. For the shoot they had been able to secure an extra part of woodland which was where they housed the 3D shots.

First target of the day

Personally I’m not sure if I liked the 50/50 split, the 3d targets were really nicely set, well placed and at sensible distances, which gave archers confidence. The paper faces in general weren’t too bad, but I think it would be far to say that some were stretched. In stretched I mean target face being too small for the distance, this was especially the case for the smaller faces. an example of such was our starting one the rabbit. By having them in two halves it could make people feel despondent if they shot the papers first.

Sharon on our second target

Having said this the course was still fun to shoot. The course layers making extensive use of framed shots between trees. 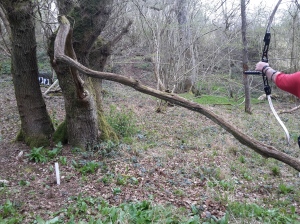 Really liked the setting of the capercaillie in the trees, looked very natural. It was lovely to wander round a wood and to hear only the sound of other archers in the distance.

Shot through the tree at capercaillie

It was also lovely to see so many primroses in flower covering the ground throughout the woods. Could have been called a Primrose shoot.

Another great shot was the flying duck, shown below.

Sharon did really well getting a pro kill 24 point shot, the only problem was when you hit it, the target would spin round. 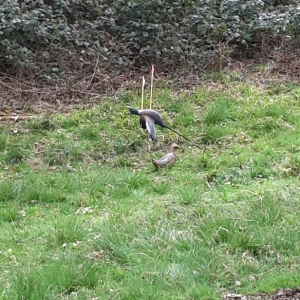 The 3D duck with Sharon and my arrow in

Our group included Steve and Rae both shooting barebow, with Gerald joining us to walk round with Rae and his dog Two-Bob. 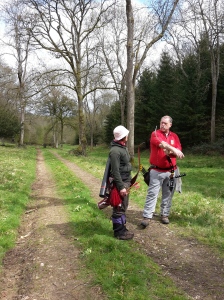 It was a very sociable and relaxed day overall and it was nice to hear positive comments form archers who had attended our shoot the week before. 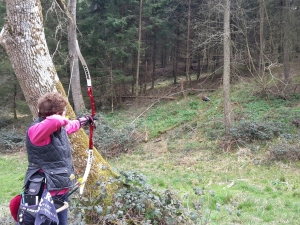 The day flowed well with no hold ups, maybe because of the lower numbers or simply because it was a good course, along with good catering especially the selection of home made cakes.
Sharon won ladies hunting tackle and I somehow managed a first in American Flatbow.
Think it will be a shoot we will return to, though not sure when their next shoot is.
Thanks for reading