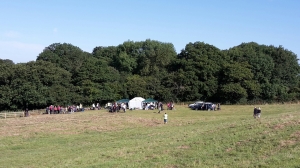 I’ve been falling behind on writing these shoot reports over the last few weeks so I’m going to try and catch up now starting with Lyme Valley Archers shoot.
Last Sunday we headed north to Lyme Valley shoot grounds outside Stoke on Trent. Due to the extensive road works on the motorway and the 50 mph speed limit  we seemed to take ages to get there arriving to find the field already full of archers’ cars. A clear sign of the shoots popularity. Here is a link to their past shoots.
The good news was that the weather was dry and warm though I’m beginning to think August is less summer and more early autumn this year. As it was there was a slight chill in the shade of the wood. Thankfully it was not raining, Lyme Valley can get very slippery in the wet, since it is as its name suggests, situated in a valley with quite steep sides in places.
The course was a mix of 3d and paper faces with a couple of new 3d targets I don’t recall seeing before. There were 36 targets in total, unlike last time though they were all in the wood and none in the field. 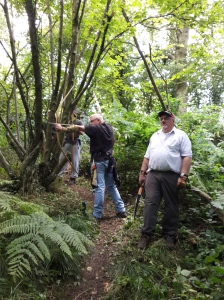 There were five in our shooting group with David and Dan from Paget de Vasey shooting flatbow and longbow respectively along with John from Forest of Arden shooting flatbow all joining Sharon and I. The group gelled well and it was a really good laugh all the way round the course. 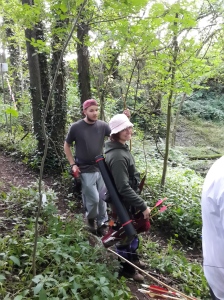 We started on target 30; a down hill 3d bear that was trickier than first looked.  I think we didn’t stop joking and laughing all day . The course only problem we had was when Sharon’s rest broke about 7 targets in and she had to fit a replacement. 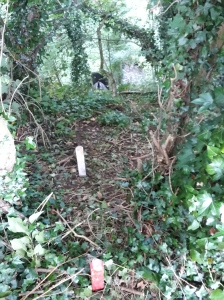 Lunch break was between 12:30 – 1:15 after which saw us return to a tricky uphill shot at a 3D turkey. Lyme Valley operates a lunch break where all shooting stops to allow archers safely off the course for lunch. To be fair I think it would be very hard for them to do a shoot through due to the woodland shape being along a long narrow valley. 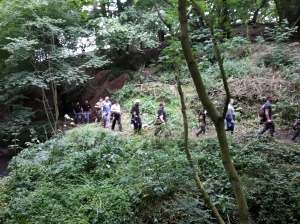 Archers heading back after lunch break

Over lunch and chatting to others we discovered there had been a problem at the opposite end of the woodland which had stopped archers shooting for a short time but we were unaware of.
The mix of targets and distances was good though I think the crocodile was a little on the far side as you were aiming at its side.
There was a great shot across the stream to a 3D bedded large deer that I completely misread resulting in a third arrow as my first and second landed in the mud in front. 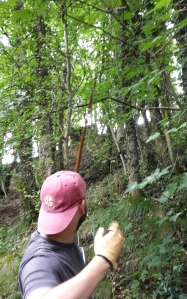 I think something that could improve peoples’ enjoyment of the shoot and save on broken arrows is if when the course layers dig out the bank for a shot they put either a boss or thick foam behind. They could camouflage it easily enough with undergrowth etc. The reason I mention this is that both Sharon and I broke the piles off a couple of arrows when we skimmed the top of 3ds and went into the bank.
To be fare the course layers must have worked really hard to get in some of the shots so credit to them for that. 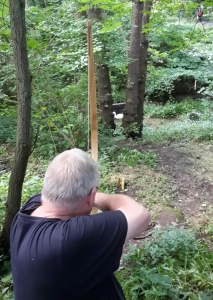 There were some really nicely framed shots and some good use of up and downhill terrain features. I liked a 3D deer between a fork in a tree which we shot early in the day. 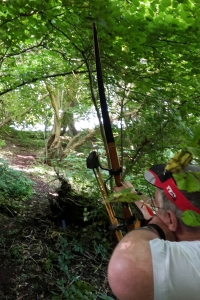 3D deer between the trees

The large grizzly bear up against the tree was another shot which made you think about which angle to take. 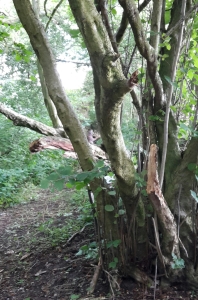 Overall it was a good challenging course with a couple of shots that could have been improved with modification to peg position and consideration of overshoots.

Sharon came away with first in ladies hunting tackle but nothing for me other than a couple of arrows to repair and good memories. Sadly the journey home was even slower due to more traffic and reduced speed limit.
Thanks for reading.