We were a little busy last weekend. Friday night a rock concert in Birmingham, bit of practice Saturday, then back in time to see the 6 nations rugby and off to trophy shoot Sunday.
This meant on a chilly Sunday morning we packed the car and were off north to just outside  Derby for the Centaura shoot.

This was to be a bit different to a normal open shoot as it would be a 36 target wooden arrow only. So no crossbow or compounds, just longbows, afb and recurves in hunting tackle classes. (Sorry nearly forgot the primative class.)  Still it saw over 80 people attend in the mix of classes. Here is a link to last years Trophy shoot report.

Me on the first target of the day

The course has seen some extensive work at one end of the wood due to essential tree felling after one tree blew down on top of their secondary hut and toilet block leaving only splinters and large logs. The result is it has really opened up the canopy in that part of the wood.

Area by the felled trees

The course itself comprised of some new and some very familiar shots.

The polo shot from behind

The now infamous polo shot returned, this time with a 3D owl target, though I think it was a little too close to the archers as I  think some lower poundage bows might struggle to clear it.

The polo shot from the side

The course was a mix of 3d and paper faces set at sensible distances in the most part. 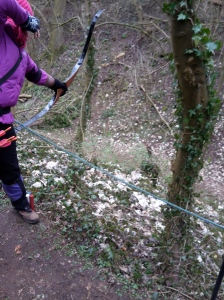 Sharon on one of the down hill shots

With a small shooting group of Sharon, myself and Alan form Pines Park we made good progress with few hold ups prior to lunch. Most groups were only 4 in number which made in all a good day that flowed fairly easily. 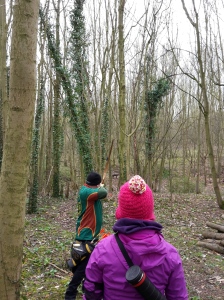 Lunch break was from 12:30 -1:30 and this slowed down the day a little bit but we’d finished by 3 pm
Despite predictions the rain stayed away but it was a cold day.
Sadly there were no trophies for me this year, not surprising really as am still coming to grips with the flat bow and building my own confidence in it. Sharon won ladies hunting tackle again so the trophy returns for another year.
Thanks for reading