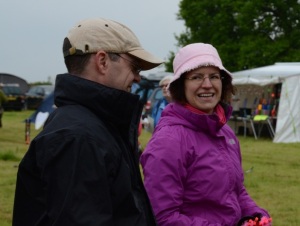 For those interested here is a link to the official NFAS 3D Championships.
http://www.nfas.net/photos/20143Ds.asp
There are some great photos Alex really captures the spirit and atmosphere of the event and people attending.

I think this years championships could have a title of the 3D muddy championships rather than archery championships as thanks to the British bank holiday weather of heavy rain the camp site and courses resembled the battlefield of the Somme at times. So before I start I’d like to thank all those who put the effort in to set up the courses in such weather, along with the admin staff who did a storming job before and during the event. 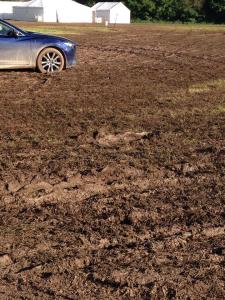 Despite these conditions it was a good weekend with friends, good courses and some positive results.
For those not familiar with the event here are a couple of links to previous years 2013, 2012.
Basically it is a 2 day shoot organised by the NFAS where you would shoot 2 courses one each day. Wooden Arrow archers will shoot A and B whilst metal / carbon arrow archers will shoot X and Y courses. The courses being set either by local clubs or groups of volunteers.
Each course is made up of 40 3D targets of varying shapes and distances.
Initially we had thought of camping but having seen the forecast we chose not to camp but to stay at a local Premier Inn just outside of Derby. This proved to be a good call and very popular with other archers including a few friends.

It would be fare to say Saturday was wet in the morning through until about 3 pm. We were to shoot B course today and A course on Sunday.

The only issue with Osmaston is that the site has been used for five years so finding new shots and routes is hard. Despite that the course layers did their best to set a 40 target course. I would start on peg 14 & Sharon on 10. There were two other adults in my group Les and Shirley and one junior Aaron.
Sorry there aren’t many photos but rain and phone camera don’t mix well.

I think it would be fair to say that B course was a much easier course as far as distance is concerned but that made you relax and lose concentration. So despite scoring a personal best of 754 points I knew that those that kept their concentration would do well and the top hunting tackle archer came in with 814 points.
By the end of the first day we were tired but  in good spirits. Largely helped by the very illusive sun making a brief appearance for a couple of hours.

We headed back to the inn where we could grab a quick shower and dry out the clothes before meeting up in the bar and enjoying an evening meal with fellow SVYF members.

Sunday morning started with very heavy rain which persisted for a few hours but by 2 it was cloudy and began to brighten up. We collected our score cards from administration and then had a look at the previous days results and positions which were up and saw Sharon in  third place and me in sixth. We were both in the same shooting groups and starting on the same peg numbers as Saturday.

Sunday’s course was completely different with some fantastic framed shots.
I let myself down on Sunday by not having something to eat at the first food stop which resulted in a sugar level drop and corresponding energy level drop mid way round that cost me points. Will hopefully learn from the mistake and replace the energy bars I normally carry in my quiver. 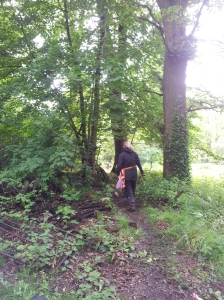 Sunday was hard work as by now the ground was saturated and paths that had seen hundreds of archers through were slippery and ankle deep in mud making it very easy to fall. Add to this that people were getting tired I was amazed no one fell.
Anyway back to the course. We started on an uphill brown bear positioned against a tree. The use of foliage and ground was superb with it being a challenge to hit most targets from your first peg.
My one good shot of the day was a bedded white ram which by some miracle I managed to 24.

There have been a few comments on the society boards about some of the 3d targets positions not being ideal if you missed. I know I lost 3 arrows over the weekend, but that is the nature of the sport in many ways. I do think the use of a few well placed nets would have speeded the day up though.

The full scores are available from the nfas website on this link.

Sharon said she didn’t shoot well having blanked one target and taken a third arrow on another.  So you can imagine her delight and shock when she was called out in first place.
Sunday we returned to the Premier Inn and had a couple of drinks in the bar to celebrate. 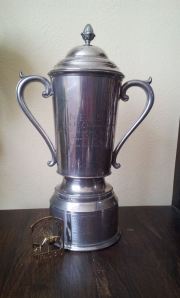 We would also like to congratulate Colin for his placing in Gents Crossbow and the wonderful Chrissie Harley on her placing too in Ladies longbow.
As for me I dropped 3 places so ended the weekend in ninth place with 1412, still my best result in a 3D Championships and matching my position from last years national championships.

Monday morning dawned with blue skies and warm weather which was beneficial as we had arranged to help the HaySmith crew who had laid X course walk the course and clear up any litter, remove signs and return it back to a natural state. Though I think the camping and parking  field may take longer to recover.
So after a long weekend and miles of walking we finally got home and could relax. Our boots and gaiters are still drying out and the poor old car resembles one from the RAC rally.
As always thanks for reading.