The other weekend Sharon and I had the opportunity to shoot a different style of archery competition to the normal NFAS shoots we attend. We shot a couple of the rounds of the 3DAs, being hosted at Long Eatons grounds. You can find the full details of the 3DA tournaments on their website https://www.3darchery.co.uk/
So for us it would have a different scoring system, a different atmosphere to the an NFAS shoot, a different structure, and format with less targets and only one arrow per target, but and probably the most important thing was it was still fun.
This 2 day competition saw archers from across the country shoot 2 courses, one each day each comprising of 20 targets. These rounds would be the Unknown and Known distances (UDC and KDC for short), one being shot in the morning the other the afternoon
We would only shoot the morning on both days, which was the unmarked course. The series is open to amateurs and professional archers, with two different courses, one shot on Saturday and one Sunday.

The format is different to the NFAS in you only shoot one arrow per target, which means you need to focus far more. It does get a little annoying when you miss a shot you’d normally get, but those are the breaks. In the morning the course is UDC, where you can use binoculars to identify your target, but no range finders. In the afternoon you shoot the same course but can use range finders as the afternoon would be the known distances competition KDC. 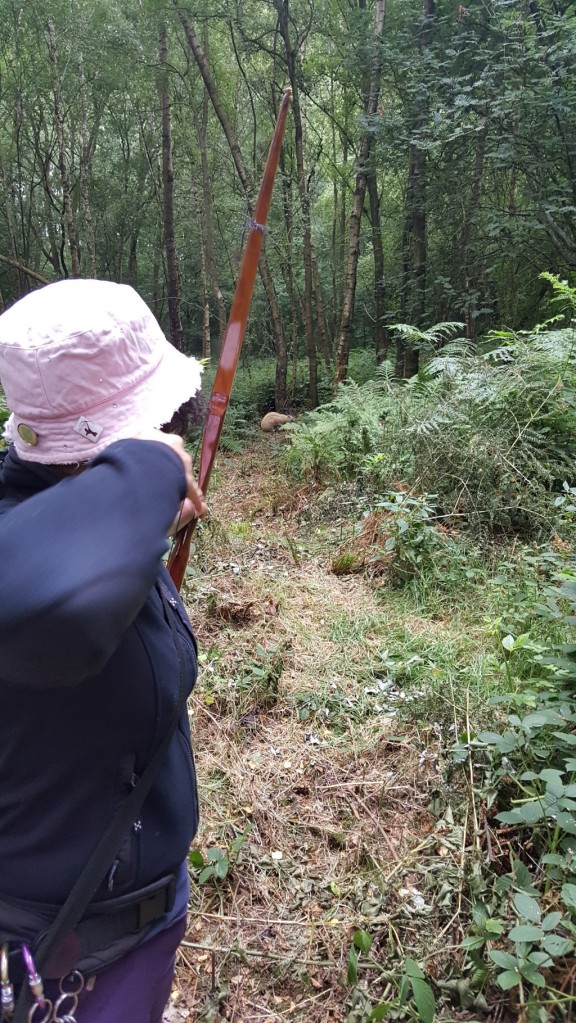 The course layout is a bit different too, with all targets being walk backs. Rather than trying to give a long explanation here, I’m just going to post a link to their site that explains it far better, including diagrams of how the different layouts work. (https://www.3darchery.co.uk/sample-range-layouts) I have to say I was a bit sceptical as to how well it might work initially.
Due to the set up of the course, one of the safety rules is you can can’t collect if group to the side is shooting. This may sound a bit strange, but when you remember that archers to your side might be shooting at 50 yards and you are at 30 yards so in front of them it makes sense. As I said have a look at the link above and you’ll understand the rational. I was concerned that this waiting round might slow the day down, but to be honest it didn’t, with us finish on both days just after a couple of hours.
Archers were given 3 1/2 hours to shoot your 20 targets, which was ample time as there weren’t as many people as at an  NFAS shoot being a little over 40 competing and I think about a dozen non comps like ourselves.

Example of shot at a 3D coyote, you can see coloured pegs.

The distances are set by the style you are shooting from 50 yards for the compounds down to 30 yard max for the traditional. This meant no target was over 30 yards from the yellow peg, but those targets could range in size from a 3D Bear to a 3D coyote.

One of the nice shot worthy of mentioning was on the Sunday and was a 3D bat hung upside down from a tree. I feel there is some something to remember with this form of competition, that though targets are set at a maximum of 30 yards, those targets can range in size. This can really throw you at times as you see a large boar and you expect it to be further than it is.

The style of bow you shoot denotes which shooting peg of which there were 3 you shoot from, the numbered peg being the furthest peg for the sighted compounds, then the red peg and finally the yellow being the closest.
Since we were shooting traditional bows, with wooden arrows we’d be shooting off the yellow peg. 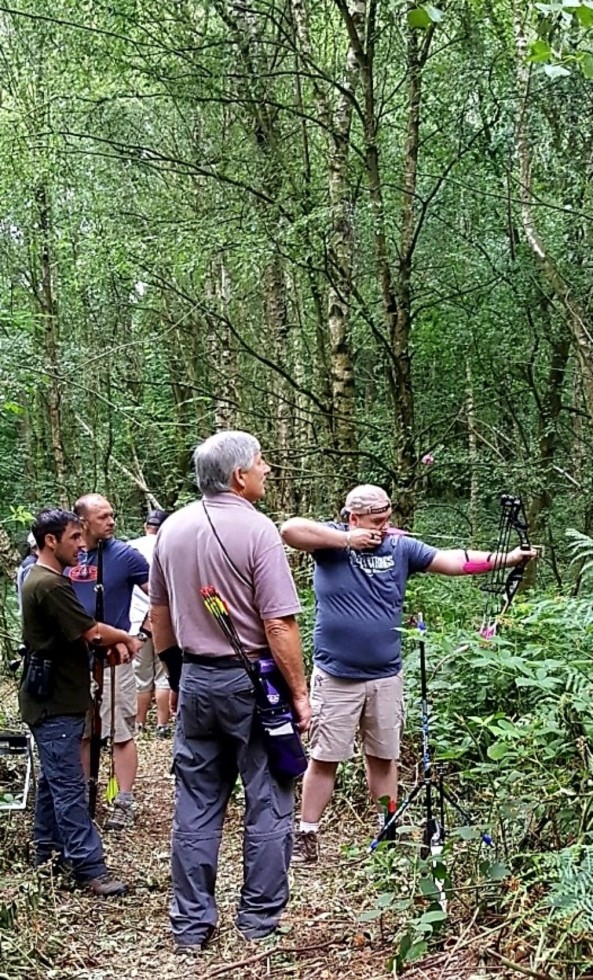 Archers on peg on Sunday

Scoring is also different different to the NFAS , with scoring zones ranging from 5 points  to 12 points (14 points if you feel confident and name a target zone)
Hit on the target not within the kill zone scores 5 points, 8 , 10 for the inner kill and 12 for what I would call the pro ring
One interesting thing I noticed was the use of binoculars. Okay, so I know I am likely to be hated by some NFAS archers out there but I will say that despite several archers using them, the very use of of binoculars did not slow the day day down and in fact I think they helped. There were a couple of shots where using them helped work out what the target was, since there were some 3Ds I hadn’t seen before and so in turn identify where to aim. People weren’t spending ages looking through them on the peg which is often said. Most of the time it is a quick 5-10 seconds to focus in and that is it. Like the photo below shows, it is more often the group that are using them than the archer on the peg.

Can you see it?

I wasn’t shooting well having strained my back gardening the previous weekend, removing any chance of practise prior to the event. I was also trying out some new arrows with the Gateway batwing feather fletching cut which I am going to write a review of when I get the chance and experimented more..

Archers massing for the start on Saturday

On the first day we shot with David, but shot on our own on the Sunday. One thing I really liked was the chronograph station on the course, where archers had to have their bow speeds checked. Maybe there is something that the NFAS could learn from that.
Sunday would also see a very early start with us having to be on site and ready to start by 8 am, so didn’t get chance to get on the practise range to warm up. Both days were pretty warm and dry with the sun coming out on the Sunday afternoon resulting in the final shoot offs being under a baking sun.
I have to say I was slightly annoyed that I missed some shots that I really shouldn’t, missing one on saturday and 2 sunday. Still managed 138 on Saturday and 137 Sunday.
I think my best shot of the weekend was hitting the standing bear between the trees on Saturday. 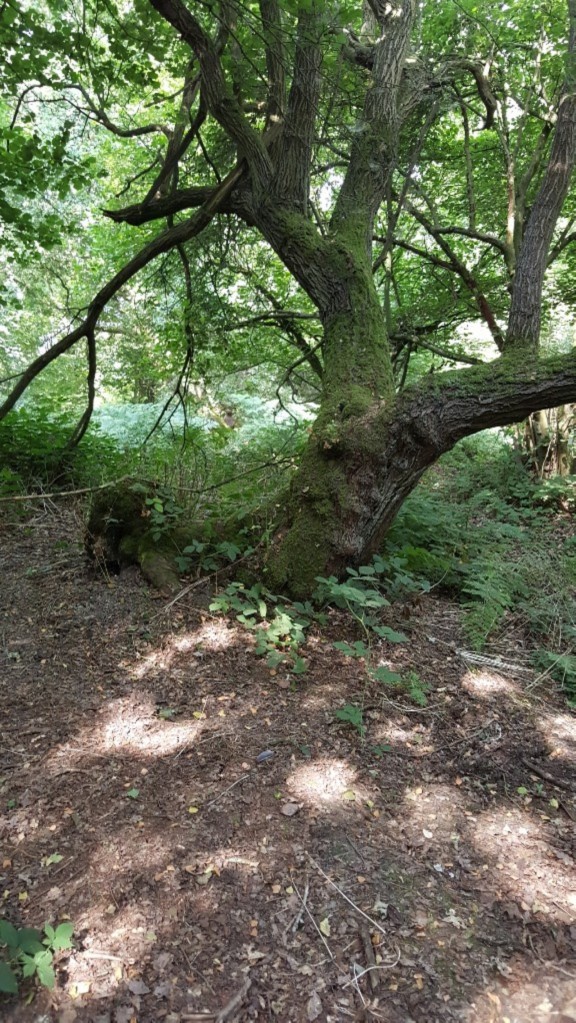 3D bear between the trees from compound peg 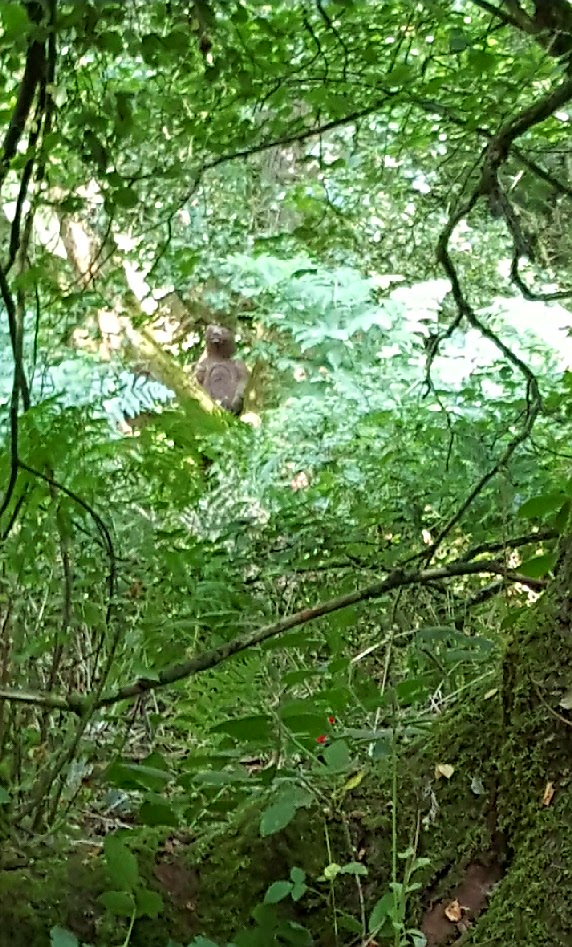 3D bear shoot after zooming in a little

I think there were times when I got the feeling of being a bit of an arms race with the latest equipment, binos, accurate range finders etc. but at the end of the day the latest equipment might help but it is still down to the skill of the archer.
Some have commented on it being expensive to enter and yes I guess it is if you compare to how very cheap it is to shoot at the NFAS competitions.
Overall we enjoyed ourselves and had a laugh, the shoot off on the Sunday between the top shots was quite fun to watch too. You can find a full breakdown of the scores here (https://www.3darchery.co.uk/2018-results) For those curious yes I’d be tempted to give it another go next year.
Thanks for reading.